Since its founding in the 1970s, the Residency program has woven living art and artists into the fabric of the Cathedral, providing time and space for artists to respond to the Cathedral as a powerful creative statement in stone, and opportunities for the public to access their work.

Many of the artists, scholars, and environmentalists have remained involved with the Cathedral since their appointment in the 70s and 80s. Terms for more recently appointed residents are now three years. Some present regular performances—which have become synonymous with the Cathedral itself—throughout the year; others lend their art to the Cathedral on a project basis.

The Cathedral greatly values its Residency program, which will be carried forward in new ways into the 21st century

David Briggs is an internationally celebrated organist whose performances are acclaimed for their musicality, virtuosity, and ability to excite and engage audiences of all ages. Master of an extensive repertoire spanning five centuries, he is known across the globe for his brilliant organ transcriptions of symphonic music by composers such as Mahler, Schubert, Tchaikovsky, Elgar, Bruckner, Ravel, and Bach. Briggs has been fascinated by the art of improvisation since childhood, and frequently performs improvisations to silent films such as Phantom of the Opera, The Hunchback of Notre-Dame and Nosferatu, as well as a variety of Charlie Chaplin films.

Musical theater composer, lyricist, and playwright Jason Robert Brown has created award-winning productions that have garnered wide audiences and critical acclaim. His musical, “The Last Five Years,” won Drama Desk Awards for Best Lyrics and Best Music, and he received the 1999 Best Score Tony Award for his work on “Parade.” Brown’s first musical, “Songs for a New World,” has been enjoyed in over two hundred productions worldwide. His most recent musical, “13,” premiered on Broadway in 2008.

I Giullari di Piazza is an American performing troupe that creates new musical and theatrical productions drawing on traditional southern Italian music, theatre, and dance, combined with folk legends, myths, and Commedia dell’Arte. The company was founded in 1980 by artistic director, singer, and actress Alessandra Belloni. Since then, they have performed and taught at many New York City venues and cultural institutions, and have brought their fiery productions to cities throughout the U.S. They were recently featured in “SPIDER SEX,” a National Geographic Documentary on spiders directed by Jeff Morales, in which they performed the tarantella, a dance used as an antidote to cure the mythical bite of the tarantula.

Grammy-winning singer-songwriter Judy Collins has been performing and recording since the 1960s, with a repertoire spanning folk, show tunes, pop, and rock-and-roll standards. Associated closely with such folk singers and protest poets as Bob Dylan and Leonard Cohen early in her career, she later branched out to record her own compositions and Broadway tunes, including her 1975 Grammy-winning rendition of Stephen Sondheim’s “Send in the Clowns.” Collins has also published multiple memoirs, founded her own record label, and continues her commitment to social activism as a UNICEF representative campaigning for the abolition of landmines, among many other causes. She is an integral part of the Cathedral’s annual New Year’s Eve Concert for Peace.

Under the leadership of Frederick Renz, Early Music New York (EM/NY) is internationally acclaimed for its vibrant and provocative music and theater performances of pieces from the Medieval, Renaissance, and Classical eras. EM/NY performs an annual series of holiday concerts at the Cathedral as well as individual concerts throughout the year. The company also appears frequently at New York cultural institutions and museums, including the Metropolitan Museum of Art, the Cloisters, the New York Botanical Garden, and Hayden Planetarium. EM/NY ranges across a wide variety of genres, from medieval drama to classical orchestra music performed on original instruments. The company tours internationally and has appeared on multiple national television programs as well as on National Public Radio.

The Grammy-winning Paul Winter Consort, founded in 1967 by celebrated soprano saxophonist Paul Winter, combines jazz, classical music, world music, and the sounds of animals and nature in their resonant compositions. The Consort is an integral part of many of the Cathedral’s largest annual events, including the Earth Mass for the St. Francis Day Blessing of the Animals and their beloved Summer and Winter Solstice Celebrations, in which they honor the cycle of the sun and the seasonal changing of the light.

Philippe Petit is a French high wire artist, famous for his balletic and death-defying performance on a wire clandestinely rigged between the World Trade Center towers in 1974—resulting in his short-lived arrest and a new appreciation for the soaring architectural beauty of the Towers. In addition to his WTC walk, he has completed walks on other landmark structures, including Notre Dame Cathedral, Paris, and the Sydney Harbor Bridge. In 1982, he walked a wire strung across Amsterdam Avenue to the Cathedral’s West Front to inaugurate the new South Tower building program. The film, “Man on Wire,” about Petit’s World Trade Center performance, won the 2008 Academy Award for Best Documentary. His 2013 book, Why Knot?, is an idiosyncratic compendium of knot-tying tips, tricks and anecdotes.

Ralph Lee has been creating award-winning puppets since his childhood. In 1974, he organized the first Greenwich Village Halloween Parade, which he directed until 1985. The Mettawee River Theatre Company has been a center of Lee’s creative activity since 1976, when he became its artistic director. Mettawee’s productions are based on creation myths, trickster tales, Sufi stories, legends, and folklore from the world's many cultures. Each summer, Mettawee gives more than 25 performances in upstate New York and New England, capping their tour with a weekend of performances on the Close. Since 1986, Lee and Mettawee have brought music and animal characters to the Cathedral’s St. Francis Day Blessing of the Animals, and every October since 1990, they have staged the well-loved “Procession of Ghouls” as part of Halloween at the Cathedral.

Founded in 1981 by Abdel R. Salaam and Olabamidele Husbands, the Forces of Nature Dance Theatre Company blends contemporary modern dance, traditional West African dance, ballet, house, and hip-hop forms as well as live and recorded music and the martial arts in their exuberant and inventive choreography. Their residency at the Cathedral is highlighted by their annual performance interwoven into the St. Francis Day Blessing of the Animals. The company tours throughout the U.S. and abroad, and has been internationally recognized for their work with youth through workshops, master classes, and training seminars.

Born and raised in Japan, Eiko Otake is a New York-based movement artist, performer, and choreographer who worked for more than 40 years as Eiko & Koma. Her solo project, A Body in Places, started in 2014 with her visit to irradiated Fukushima with photographer and historian William Johnston. Their collaborative photo exhibition, A Body in Fukushima, has since been shown in many cities both in the U.S. and abroad.

French sculptor Jean-Claude Marchionni specializes in stonecarving and restoration of historic monuments, concentrating his work in France and the U.S. He collaborated with master sculptor Simon Verity on the Cathedral’s front portals, flanked with Biblical figures, many modeled after neighborhood residents. Marchionni has completed restoration work for the Strasbourg Cathedral and the Musée du Louvre in Paris. In New York City, he worked extensively on the restorations of Fifth Avenue Presbyterian Church, Grand Central Station and Rockefeller Center. His work is in the collections of the Jewish Museum and the Huffington Library in Ohio.

Christopher Pellettieri is a New York City native and a graduate of the Cathedral School. He trained as a stonecarver in the Cathedral’s own apprenticeship program, beginning in 1990. In 2001, he contributed to the Cathedral’s Historic Parapet with his figures of Martin Luther King, Jr., Mahatma Gandhi, Susan B. Anthony, and Albert Einstein, meant to represent the 20th century. Pellettieri works in both direct carving and pointing methods. He has completed private and public commissions, and teaches stonecarving workshops for adults and children at the Cathedral.

Simon Verity is a British sculptor and master stonecarver. From 1988 to 1997, he oversaw the carving of the Cathedral’s main entry, the Portal of Paradise, on which Jean-Claude Marchionni collaborated. Verity has completed public commissions in the U.S. and the U.K., including stonework on the interior of the Victoria and Albert Museum, London.

Greg Wyatt is a sculptor and teacher, who works primarily in bronze, emulating the tradition of Western realist sculpture, while infusing it with his own spiritual and physical energy. His work has been exhibited at the Metropolitan Museum of Art, and appears in public spaces and on academic campuses throughout the U.S. He created the monumental Peace Fountain for the Cathedral, which illustrates the epic conflict between good and evil, and serves as a mighty mid-block anchor, centered on Amsterdam Avenue and the western edge of the Close.

Having brought a forty-plus year, internationally acclaimed commercial photography career to a close recently, Wayne Pearson is now concentrating on the types of photography that brought him into the medium all those years ago – portraiture, travel, sacred architecture and the farmland of the Hudson Valley. Inspired by the work of the late Frederick H. Evans, Pearson has been directing his efforts the last half dozen years on possibly the greatest of the great cathedrals of the world, St. John the Divine.

Nicole Toutounji is a founding member of BeeVillage, a community of six hives in Battery Park, and Senior Advisor at The Honeybee Conservancy, which fosters urban beekeeping. Before discovering the magic of bees in her retirement, Nicole was an art and documentary photographer focused primarily on the life of women and children in the Middle East. She worked for UNICEF as a photographer and a photo editor, traveling frequently to the Middle East and Haiti on assignments. She's presently the Beekeeper in Residence at the Cathedral of St. John the Divine where she tends two beehives and conducts various events and seminars on the value of bees and beekeeping.

Susan Brind Morrow a scholar and author who researches the intersection between history and religion. Her most recent book, The Dawning Moon of the Mind, examines how the Pyramid Texts contribute to our understandings of the foundation of religion. She is also the author of The Name of Things and Wolves and Honey. Brind Morrow is currently at work on a new book that focuses on darkness and the place of the Black Madonna in contemporary culture.

Elaine Pagels is the Harrington Spear Paine Foundation Professor of Religion at Princeton University. Her work explores faith traditions, specifically the development of Christianity and Gnosticism, and has been a ground breaking contribution to our interpretation of the new testament. 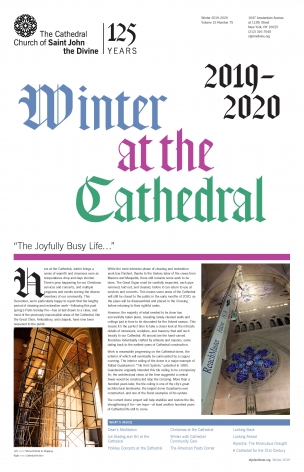