Art & Ideas
Highlights of the Fabric

Highlights of the Fabric

The word "fabric," in this context, means every single material element of which the Cathedral is composed, from the stones and brick of the building to the works of art—dating from the medieval to the contemporary periods—that adorn its interior and the 11-acre Close upon which it sits.

Cast by Barbedienne of Paris, who also cast the Statue of Liberty. Each door is 18 feet high, six feet wide, and weighs three tons. The doors’ 60 bas-relief panels depict Old and New Testament stories on the exterior side, and flowers, birds and natural imagery on the interior side.

Master woodworker George Nakashima’s Altar for Peace was crafted from the trunk of a 300-year-old Black Walnut tree and dedicated in 1986, during a ceremonial prelude to the at the Cathedral’s New Year’s Eve Concert for Peace. Shaped like a ginko leaf, its two massive sides are held together by delicately carved rosewood butterfly keys. Nakashima dreamed of providing Altars of Peace for each of the seven continents. Today there is also one in Russia and one in India.

This multicolored banner hangs above Nakashima’s Altar for Peace in the Narthex of the Cathedral. Each part of Franck’s design symbolizes as an aspect of humanity as he saw it. The colors of the stripes—brown, black, red, white, yellow, and green—represent the racial diversity of humankind as well as the green earth that is our collective home. Each stripe is doubled to represent the coexistence of male and female. The banner is tubular, signifying that there is no first and no last.

On permanent loan from The Metropolitan Museum of Art, New York, the 15th-century German choir stalls separate the Narthex from the Nave, demarcating the entrance from the body of the Cathedral with their warm, wooden hues and elegantly carved details.

The Firemen Memorial was sculpted by Ralph Feldman, a New York City firefighter, and is composed of the remains from various fire sites. The memorial was dedicated to all firefighters in 1976, and gained new resonance in the wake of September 11. It is on view in the Labor Bay.

Fate of the Earth, Peter Gourfain

The 24 wall-mounted, individual bronze reliefs that compose Peter Gourfain’s Fate of the Earth were created in 1988. They depict scenes of environmental destruction and conflicts over disappearing natural resources and are on view, appropriately, in the Earth Bay.

The pair of teak Siamese book cabinets, set beside the north and south entrances to the Ambulatory, were a gift from His Majesty the King of Siam (Thailand) in 1930, presented to the Cathedral by the Siamese Minister Major General Prince Amoradat Kridakara. The ornately inlaid cabinets required eight months’ work by craftsmen especially selected by the King himself.

Meredith Bergmann's monumental bronze sculpture, Memorial to September 11 (2012), was specially commissioned by the Cathedral as a larger version of her earlier, tabletop-sized work, created shortly after the attacks on the World Trade Center. The glass case below the larger-than-life female figure contains debris salvaged from the WTC site, uncannily shaped like a heart.

Official emblem of the Worldwide Anglican Communion, The Compass Rose is set into the pavement center of the Great Choir. It was designed by Cathedral Canon Edward N. West, whose ashes lie below the design of variegated marble and brass. The text surrounding the central cross is in Greek, and translates as: “The truth will set you free.”

The two 12-foot-high menorahs flanking the High Altar were presented to the Cathedral by New York Times publisher, Adolph Ochs, to thank Bishop William Manning for his efforts to improve Jewish-Christian relations in New York City. The menorahs are based on a relief on the Arch of Titus in Rome, depicting the Romans removing the menorah from the Temple in Jerusalem.

The two large Japanese cloisonné vases set upon the High Altar were presented to the Cathedral in 1926 by His Excellency Ambassador Tsuneo Matsudaira on behalf of his country. The design on the cool, blue-green vases represents the hibiscus mutabilis flower and the Japanese birds Ruricho, Jushimatsu, and Hiwa.

The Life of Christ, Keith Haring

The Life of Christ (1990), a bronze and white-gold triptych altarpiece, is among the last works of noted New York City artist Keith Haring (1958-1990), completed just weeks before his death from AIDS. True to Haring's inimitable and exuberant style, the altarpiece is crowded with angels and human figures, whose outstretched limbs lead the eye to the central figure of Christ. The altarpiece is a gift of the Estate of Keith Haring.

Christa (1974), a bronze sculpture of a female Christ on a Lucite cross, has been on display in the Cathedral’s Chapel of St. Saviour since it was installed in 2016 as part of The Christa Project, a large-scale art exhibition exploring the symbolism of the Christ image and the divine as manifested in every person. The work was originally at the Cathedral during Holy Week in 1984, when it was taken down early due to the controversy that it caused. Christa now hangs over an altar as both a sacred object and a historically significant work of art.

The Black Madonna of Czestochowa, also known as Our Lady of Czestochowa, is a revered icon that legend suggests dates back to the year 326 when she was discovered in Jerusalem. The Black Madonna, who has been associated with Poland for centuries, is also venerated in the Ukraine, Belarus and throughout Russia. This masterful 20th century recreation was presented to the Cathedral in 1987. In the 1980s, the icon became popular as a symbol of Polish strength and resistance; its image was stamped on a lapel pin worn by Lech Walesa, co-founder of the Solidarity Movement, the hugely successful movement for social justice and workers’ rights. Pilgrims come from throughout the world to visit the icon at the Cathedral.

Homeless Jesus (2017), a bronze sculpture of a life-sized person asleep on a bench, is installed directly to the south of the Cathedral façade on Amsterdam Avenue. The sculpture serves as a reminder that “whateveryou did for one of the least of these brothers and sisters of mine, youdid for me.”

Franck’s sculpture, installed outdoors on the Cathedral Close, was inspired by the Constitution of the Iroquois Nations: “In all our deliberations, we must be mindful of the impact of the decisions on the seven generations to follow ours.” 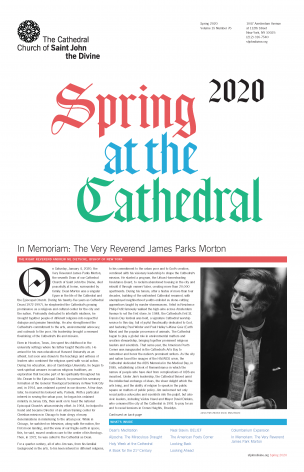