Today, June 20th, is the United Nation’s World Refugee Day, held every year to “commemorate the strength, courage and perseverance of millions of refugees.”

Earlier this year, we were honored to premiere Immigrant Songs by Robert Sirota on a libretto by The Reverend Canon Victoria Sirota, which celebrated immigrants Rafeal Guestavino, Marina Friedenberg Stern, and Ravi Ragbir. You can hear the full song here and read the lyrics here. 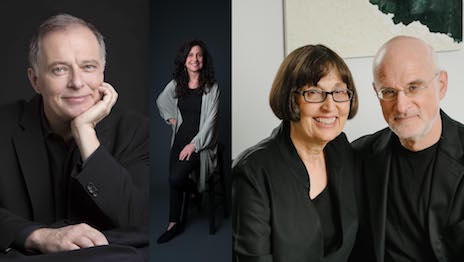 Rafael Guastavino, born in Valencia, Spain, moved to New York in 1881 with his nine-year-old son Rafael Jr., who would grow up to take over his company. His new method of fireproof cohesive construction using interlocking terra-cotta tiles required a cement difficult to find outside of the United States, and made possible vaults, staircase, domes and arches which were cheaper, faster and safer to erect.

Marina Friedenberg Stern’s family of Italian Jewish heritage left Venice in 1939 as Italy’s racial laws became oppressive. Marina was eleven. They spent two years in England working towards immigration during which time her father was interned. In February 1941 they received immigration papers enabling the trip to the United States via Brazil. She never forgot the beauty of the harbor lights in Rio de Janeiro after leaving the war-darkened London. A talented artist with paintings in the permanent collections of dozens of museums and galleries, she painted industrial landscapes, bridges, flowers, vegetables, hanging laundry and paper bags, as well as created three audio-visual paintings. The mother of Nina, director of Rose of the Compass, Marina Stern died last May.

Ravi Ragbir, born in Trinidad, legally immigrated to the US more than twenty-five years ago, but was ordered deported in 2006 after serving two and a half years in prison for a wire-fraud conviction followed by two years in immigration detention. He has spent the last eight years employed by New Sanctuary Coalition of New York City, first as an organizer and later as Executive Director. This faith-based organization offers compassionate advocacy to immigrants who are fearful of checking in with government officials. He is married to Immigration rights activist Amy Gottlieb and has an adult daughter, both of whom are American citizens. Last year, Ravi was recognized with the Immigrant Excellence Award by the New York Association of Black and Puerto Rican Legislators, given to those who show “deep commitment to the enhancement of their community.” Detained by ICE on January 11, 2018, he was released from detention on January 29, although he still faces deportation. The Episcopal Bishop of Long Island honored Ravi Ragbir with the Bishop’s Cross on February 4 and named him an ecumenical canon for immigration work in the Diocese of Long Island. He has not lived in Trinidad since 1991.