Who among you has not wondered about the red sandstone sculpture by the Cathedral's south side door?

The red sandstone sculpture depicts a man and a boy under a large tree in which a bird is perched carved by Cathedral Artist in Residence Christ Pellettieri. At a recent lecture, Chris told the audience that it had been inspired by a story he had read in the New Yorker. 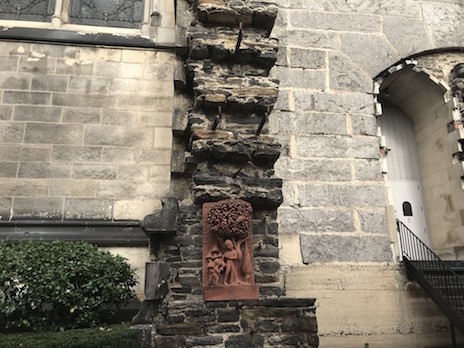 It is the story of Hikari Oe, the profoundly disabled son of novelist Kenzaburo Oe, as told by the novelist in the New Yorker of Feb. 6, 1995:

“At first, Hikari was completely negative about communicating with me or with my wife. It was as if he were trapped inside his body. But we were always trying to reach him.

When Hikari was four years old, we bought a recording of various birdsongs and played it over and over again. There would be a bird singing, and then an announcer’s very neutral voice saying ‘This is a water rail’ or ‘This is a pigeon,’ ‘This is a blue jay.’ This went on for more than two years. We played it for him all the time.

One day when Hikari was about six years old, we went to our cottage in the mountains. I was walking in the woods with him on my shoulders, and I heard a bird chirping. I didn’t know what kind of bird it was. Then I heard a voice saying – in Japanese, of course – ‘This is a water rail.’ I thought I was hallucinating. There were no other people around. It was like a phantom.

Then came another chirp and, again, ‘This is a water rail.’ It was Hikari! And he was right!

So it seemed clear then that he was capable of learning. It turned out that when we played the recording he could identify all the birds. He knew the sounds of seventy birds. A kind of genius. And so my wife and I began to talk to him, at first, through the names of birds.” (excerpt) 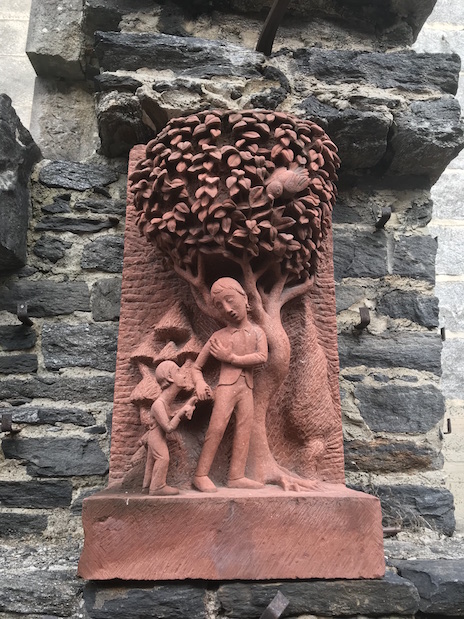 The author continues to describe that his son, then 31, never learned to really speak, but, after being exposed to the music of Bach, Mozart, and other classical composers, began composing music and thus found his own voice.

Chris Pellettieri trained at the Cathedral’s stone yard many years ago and is still active as a stone carver. He also carved the bust of Arnold Sutherland, former Director of Cathedral Security, located next to the playground.