Museum from Home: Labors of Love

Hello again blog readers and foodies new and returning! We have been touring the Chapels of the Tongues, so called because each one honors a different immigrant group coming to America at the time the Cathedral was being built, and looking at foods that come from the cultures represented. In honor of Saint Valentine’s Day, we’ve decided to undergo a culinary journey of the Chapels of the Tongues under the theme “Labor of Love.” From dishes that require special skills and technique to dishes that take a significant amount of time, we hope to inspire you to go all-out for your loved ones this month! Whether partners, parents, siblings, or roommates, it’s always the right time to show your affections in the form of something edible.

Our first stop is in the Baptistry, not one of the seven Chapels, but an important space in the building dedicated to those of Dutch heritage. The dish of crispy fried noodles named bamischijf actually has connections to Indonesian cuisine as well as Dutch, which makes sense considering Indonesia was a colony of the Netherlands from 1605 until 1945. Though it took the Indonesian National Revolution from 1945 to 1949 for the recognition of Indonesian sovereignty by the Netherlands. Because of this difficult but connected history, many Indonesian and mixed Dutch/Indonesisn immigrants made their way over to the Netherlands. From there, the spicy Indonesian dish bakmi goreng was transformed into a filling for bamischijf. While this snack is often found and prepared from the freezer aisle of the grocery store, if you felt like particularly impressing your loved one you could make the noodles from scratch, cook the noodles with veggies and meat and spices, pack and roll them into a log, cut into your desired shape, bread, and deep-fry. Nothing says love quite like the willingness to splatter hot oil all over the kitchen knowing you’ll also have to clean it up later.

The Chapel of Saint Ansgar for the people of Scandinavia brings us to a personal favorite treat that our beloved Hungarian Bakery on Amsterdam Avenue has a delicious version of - cardamom buns of kardemummabullar. Enriched dough, that is dough that contains fats and sugars (the best kind of dough), is then filled with a bright cardamom filling. Once it comes out of the oven it’s glazed with a simple syrup. The Hungarian Bakery goes the extra mile and also has sticky apricot jam nestled into its folds and crevices. In addition to the time it takes to proof this dough multiple times, the braiding done is often deeply intricate and requires the nimblest of fingers, or just a lot of practice. Your payoff though will be warm, lightly sweet, and aromatic bread that works equally as well for breakfast or a hearty midday bite between meals and will surely prove to anyone you hold dear that your love runs deep. 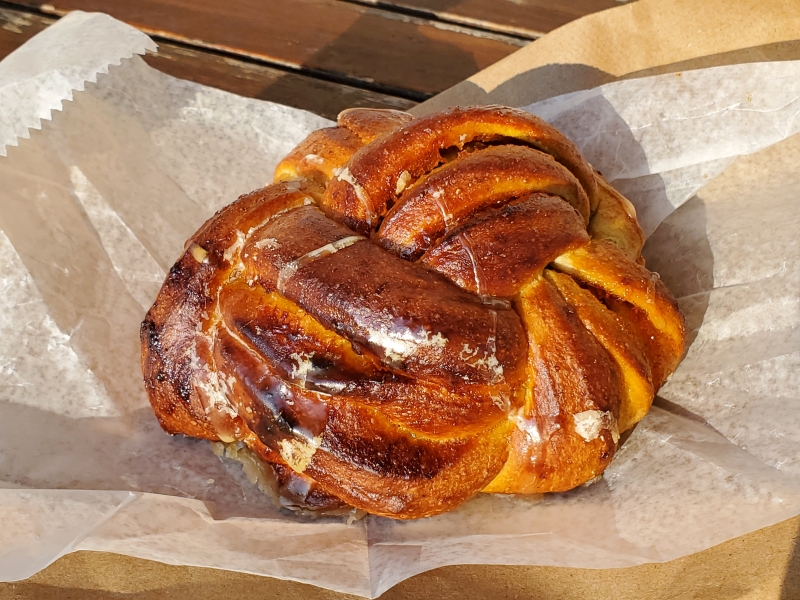 Next up on our tour is the Chapel of St. Boniface, representing Germany. If you’re looking to show someone they’re special by putting time into their dinner, we recommend rouladen. This beef roll is filled with bacon, mustard, onions, and pickles and then smothered in gravy. Decadent enough in its description, but what really makes this a labor of love is the time it takes. Once you’ve prepared your beef strips, filled them, rolled them up, tied them in twine, and seared the outside, they get submerged in red wine and go into the oven to cook on low for 90 minutes. During this time you can make your gravy using the drippings that are left in the pan--you didn’t think we were going to let you use store-bought gravy, did you? Once both components are ready, combine and serve. Maybe with homemade potato dumplings as an added treat for your potato dumpling!

This brings us to the Chapel of St. Columba, the British chapel. When looking for a difficult-but-worth-the-effort British dessert, look no further than Spotted Dick. We realize that this sounds more salacious than some people are comfortable with on Valentine’s Day, but in fact Spotted Dick is a molded custardy pudding with black currants speckled throughout it. Difficult in that it requires shredded beef suet (though the recipe we found said that butter is technically okay, too) and must be set in a mold before steaming over boiling water making this dish indeed a labor of love. But the result is a fluffy, cakey dessert perfect for drowning in custard and sharing with your special someone.

The Chapel of St. Savior is dedicated to the regions of the world where Eastern Orthodoxy is a prominent religion, and that include the country of Georgia. Nothing says love like carbs and fats, and so there was no other food we could have written about except khachapuri. This veritable boat is made of leavened bread with the center containing warm, gooey, molten cheese with butter and a raw egg yolk on top that through contact with the cheese meld together to create an intoxicating concoction. The bread vessel is intended to be ripped apart and dipped into this unctuous center, with which this blessed combo of triple fat should be promptly shoveled into your mouth or the mouth of your loved one. If you aren’t quite up for the challenge of making a cheesy bread boat, there’s a sizable Georgian community around Coney Island and Sheepshead Bay where you can find restaurants to indulge you and your partner’s cheesy whims. 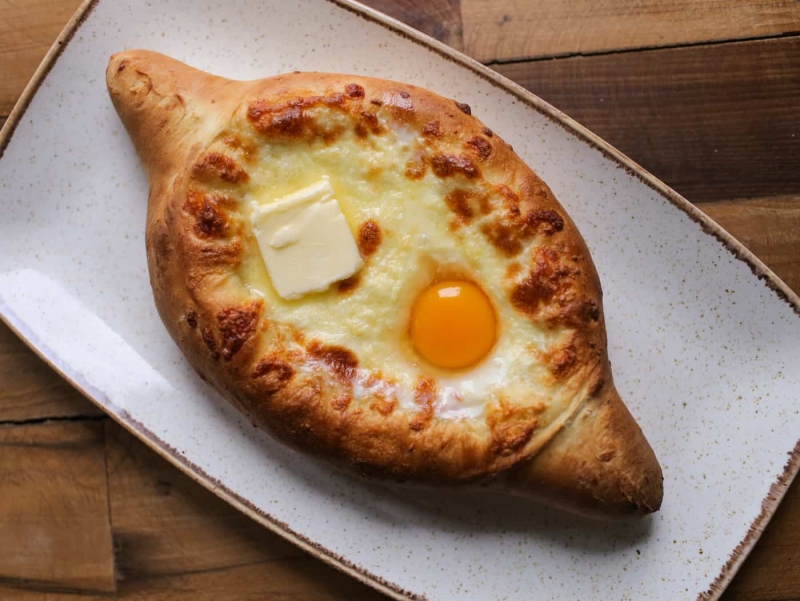 In the Chapel of St. Martin, the French chapel, we take a taste of a traditional French cassoulet. Cassoulet is a thick, warm stew, perfect for a cold wintry evening in with your cuddle-buddy or work-from-home pals. But if you’re thinking of serving it on February 14th, the work starts on February 13th. This stew has three kinds of meats--salt pork, garlic sausage, and duck (or chicken) served with saucy white beans. We don’t judge, though. We get a little saucy on V-Day, as well. The beans need to soak overnight in salt water to ensure that they cook up tender in the cassoulet. The meats are then confit-ed (or slow cooked in oil) separately in duck fat. Everything is combined with stock, veggies and a sprinkle of gelatin to thicken it up. For a little bit of ease, the name for the traditional French soup base of carrots, onions, and celery that goes into this is mirepoix, and can be bought already prepared in grocery stores. Carefully combine, bake on low heat, and six hours later your stomach will be grumbling for the fruits of your labor of love.

In the Chapel of Saint Ambrose for Italian peoples we present an unimaginably flakey and laborious pastry, sfogliatella, which many Italian-American families pronounce as “shfooyadell” - don’t ask. While the ingredients are simple, the process is arduous. The dough needs to be rolled out as thin as possible on a pasta machine, then rolled into a log to create the trademark layers and chilled before cutting, shaping, and filling. Some say sfogliatelle first came to be in a 17th century Campanian monastery while others say they originated in Naples and then made their way to other parts of Italy and beyond. The Santa Rosa variety is filled with a semolina-based custard and syrupy cherries, while other traditional variants have an orange-flavored ricotta filling with candied citron. Sfogliatelle are a favorite of both the half-Italian writers of this blog. Ashley prefers the custard and cherry variety while David prefers the ricotta filling. No matter what filling you choose to delight your sweetheart with, this endeavor requires at least four hours of your day, so plan accordingly!

To close things out in our Spanish chapel, the Chapel of St. James, we’re giving you a dish that only takes an hour. Still paella is a labor of love as it must be watched closely and each new ingredient added at just the right time to ensure they all cook correctly and don’t burn to the bottom of the pan. Similarly to the cassoulet, this dish involves lots of different proteins served over a starch, in this case rice instead of beans (though if you want an easier Spanish dish, rice and beans sounds delicious, too). Some traditional proteins are chicken thigh, jumbo shrimp, mussels, and calamari rings, though, if you wanted or needed, you can certainly make a vegetarian version with whatever veggie you and your dearest prefer. These are then cooked in with the rice that has been seasoned with saffron (a Crocus stigma that’s a labor in it’s own right to produce), onions, peppers, and tomato, adding one protein at a time and slowly cooking the rice in broth and white wine. The bulk of the time spent on this dish may be the shopping trip. But when you and your sweetheart are reclining on the couch with your bellies full, you’ll both appreciate knowing that whoever has to do the dishes, there’s just one pan that needs to be cleaned. 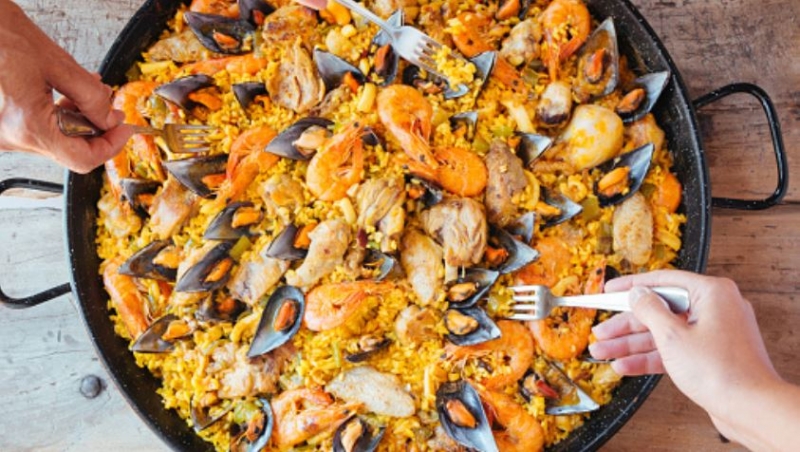 Perhaps you’ve been inspired to surprise your beloved with one of these particularly labor-intensive dishes for Valentine’s Day this year. Or maybe you’ve decided that you are your own Valentine in quarantine and you deserve a treat. However you’re spending the holiday, we hope you’ll feel loved and stay safe.