Above: 9/11 flag at Trinity School before conservation work.

The theme of “Stars and Stripes” has been an inspiration to many artists who have added their own interpretations of it through various techniques and mediums. One stellar example is a large 7.5 x 11 foot flag created at the Trinity School on the upper west side and dedicated to 9/11.

To create the flag, strips of white and red cotton duck canvas were sewn together with the blue canvas squares forming the canton. The handprints stand for stars on the canton as well as decorating the white stripes. The method of application was dipping student hands in various skin tone shades of acrylic paint and carefully “printing” them onto the canvas. The loops at the top allowed the flag to be hung on a rod. 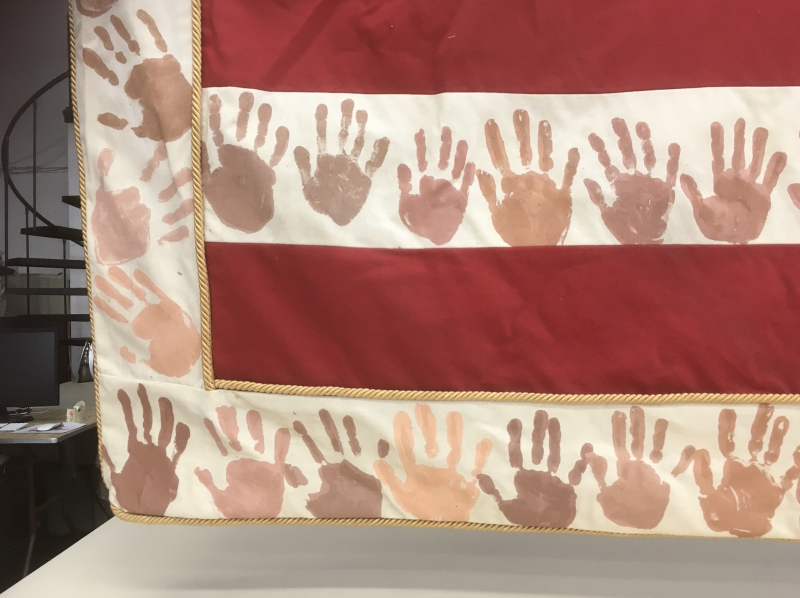 Handprints on stripes and borders, with gold braid trim 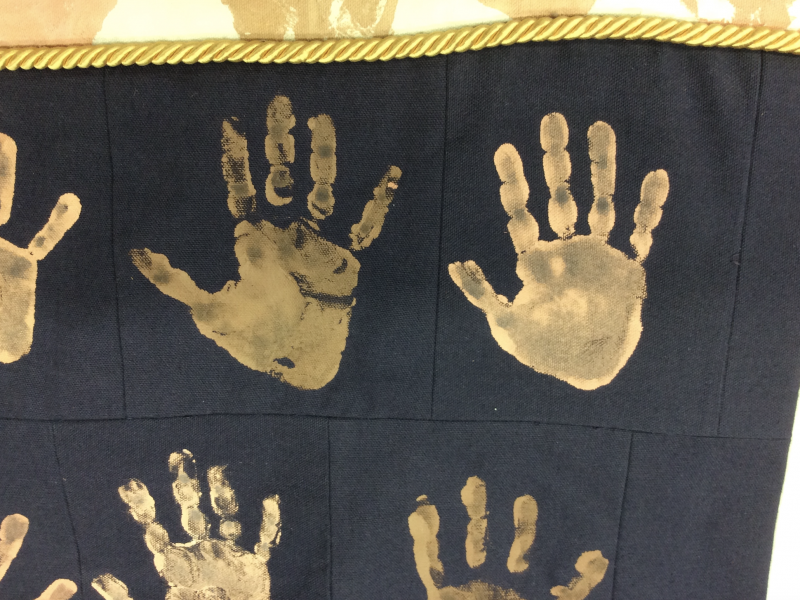 "Stars" handprints on the canton

The Trinity School wanted to preserve the flag and improve its condition to continue exhibiting it in their building. The Cathedral’s Textile Conservation Lab was called on to assess its condition and make a plan for conservation.

While in an overall good condition, the flag had several issues that required attention. Over time (19 years!) the heavy face fabric, weighed down with acrylic paint and gold braid began to sag, forming creases along the sides and a “belly” in the middle. The hanging loops had created stress points on the flag and the wooden rod had warped, causing further strain. Dust and soiling on the surface of the flag and the lining were also a result of long open exposure in the school’s entranceway.

Given the above factors, the goal of conservation was to clean the flag, stabilize any vulnerable loop areas, minimize creases and bagging and create a new display system. 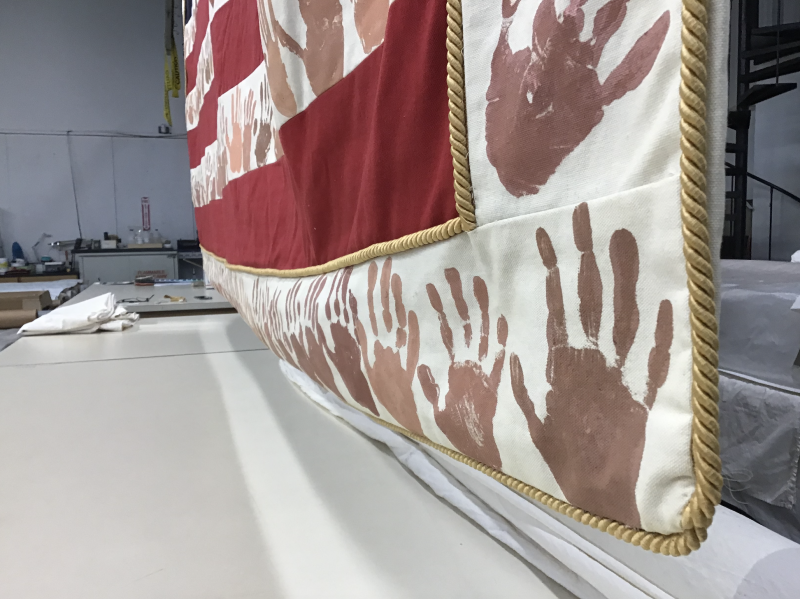 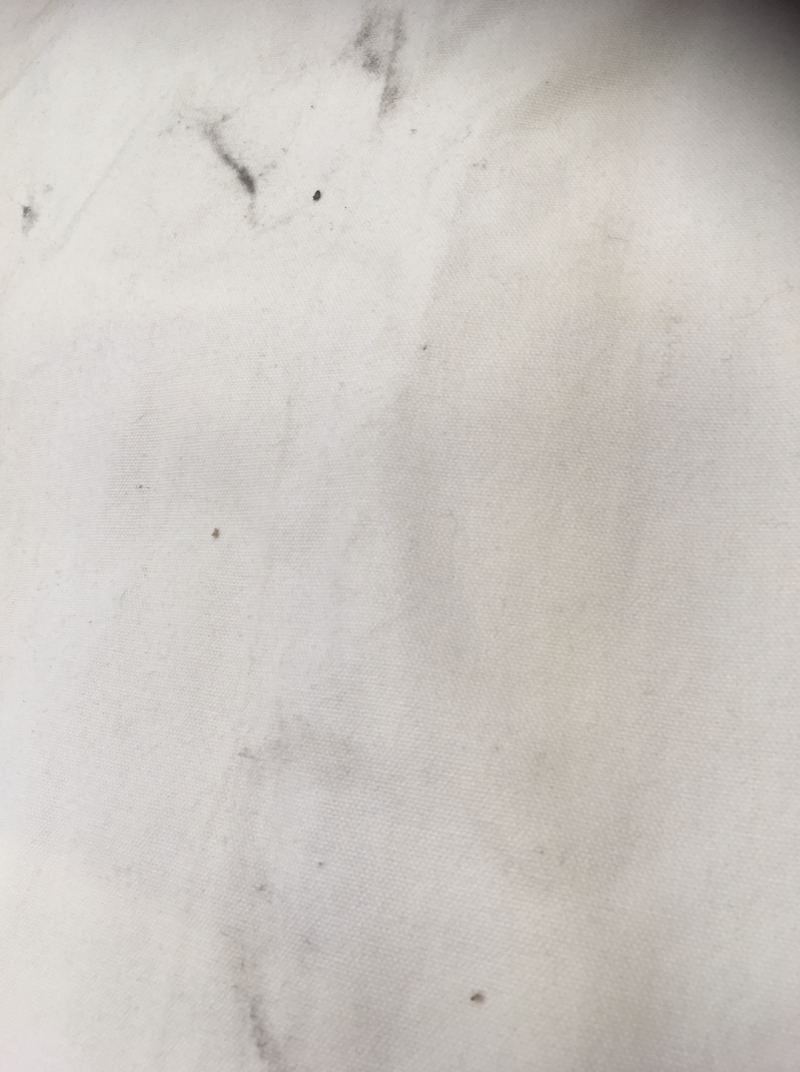 Conservation vacuuming and dry clean-sponging techniques were used for maximum removal of dust and soil residue. The lining was repositioned to eliminate some of the creases and the sagging front belly. The hanging loops were replaced with a strip of Velcro that would attach to a new aluminum slat with opposing Velcro affixed to the wall. Additional Velcro was strategically sewn to the sides to eliminate most of the remaining creases and sagging.

When the flag was returned to the School it became clear how symbolic and well-loved the object was: the staff and security personnel were happy to see the flag conserved and couldn’t wait to see it reinstalled. Some recalled the children participating in the hand stamping 19 years ago. From those present we learned that for the time that the flag was gone, students were asking and waiting for its return, and as the flag was being rehung just before Thanksgiving vacation, great joy was expected on the part of the students and faculty when they returned from break. 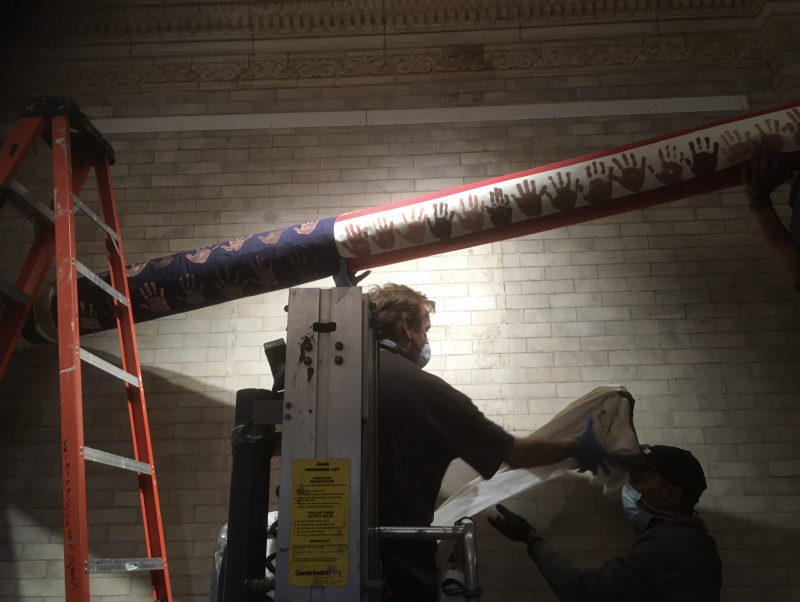 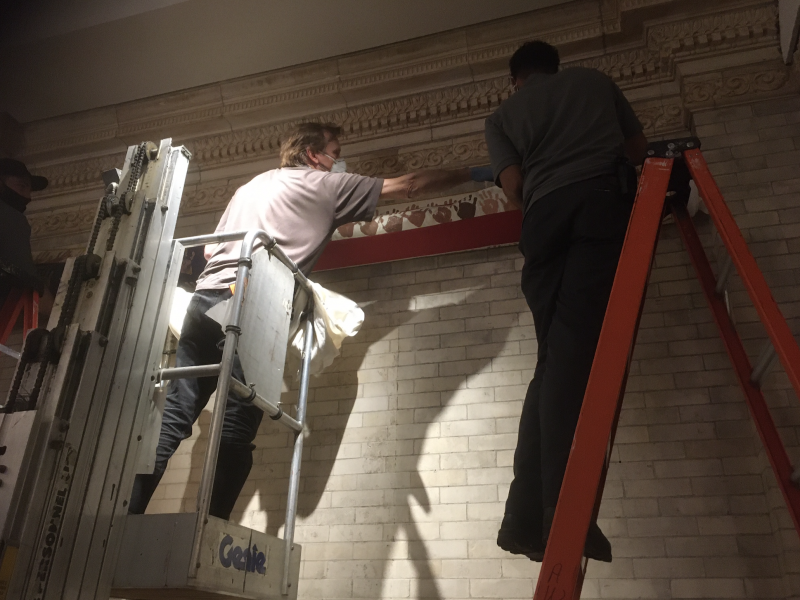 And here it is, the “Stars and Stripes”, conserved and returned to its place of honor, for years to come. 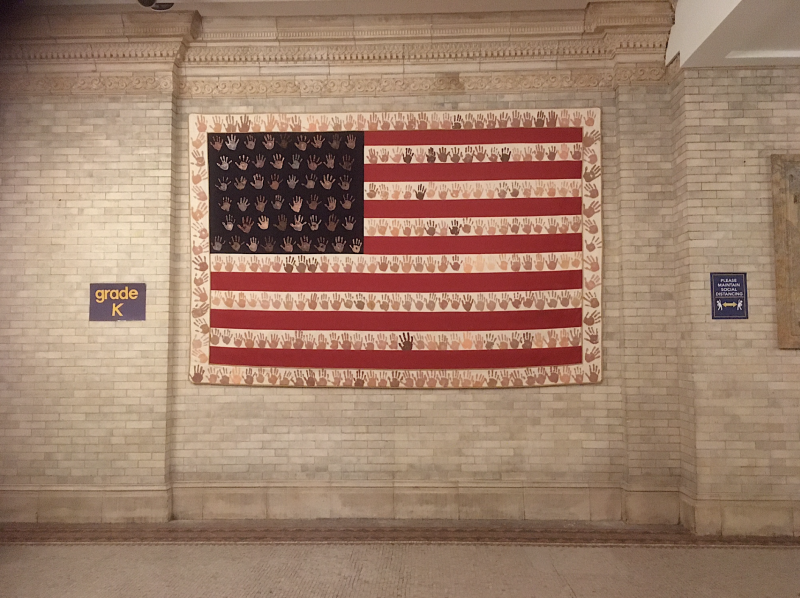