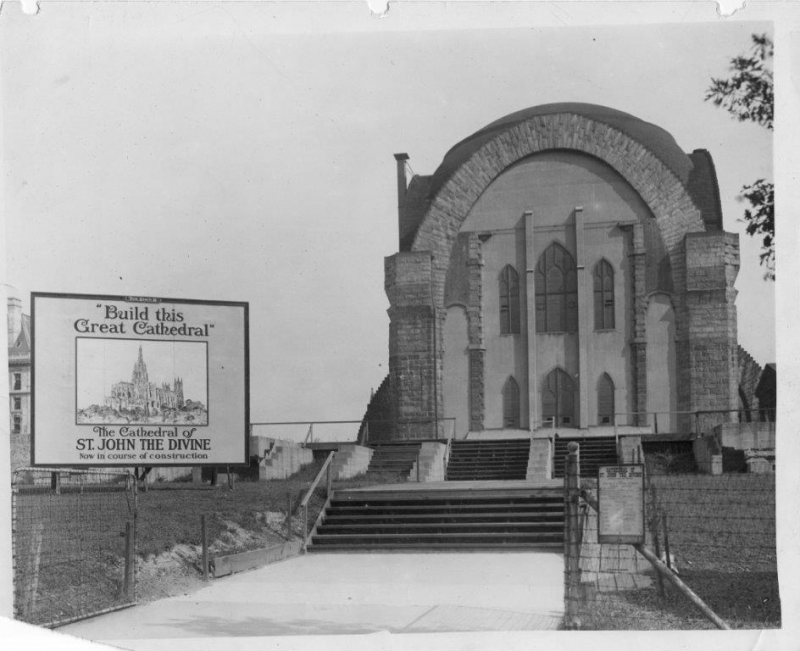 Have you ever had to finish a project that someone else started?

If so, you can easily understand the challenges that architect Ralph Adams Cram faced in 1916 when he was given the job of completing the Cathedral of Saint John the Divine. Barely a third of the cathedral had been built since its cornerstone had been laid a quarter-century before. The photo, shot from Amsterdam Avenue, shows the cathedral’s eastern section fronted by an empty expanse where the nave should be.

Cram’s mandate was to redesign the building as a Gothic cathedral while harmonizing his design with the previous architects’ synthesis of Romanesque and Byzantine. This is the story of how he met this daunting challenge and succeeded in creating New York’s most majestic interior.

Cram was no stranger to St. John the Divine. In 1889 he had entered the competition to select an architect to design the cathedral. He had just hung out the shingle of his new firm, having qualified as an architect while working as a draftsman at a Boston-based specialist in church design. The 26-year old Cram must have hoped ardently to win the prestigious commission for he submitted two entries, each in a different style: Richardsonian Romanesque and neo-Gothic. Neither made it to the competition’s finals. The cathedral’s trustees selected the eclectic and audaciously cyclopean design of George Lewis Heins and Christopher Grant LaFarge.

Construction of the cathedral’s eastern half began in 1893 and hit one setback after another. The excavation hit soft stone and springs instead of bedrock. Monolithic columns fractured into duoliths. The building fund evaporated as the project ran catastrophically over budget and behind schedule. George Heins died prematurely leaving his partner LaFarge to struggle on alone. In 1911, the frustrated trustees abandoned the original plan and dismissed LaFarge.

In the meantime, Cram had made a name for himself. His firm had become a successful designer of churches and university buildings, working mainly in a refined neo-Gothic style, while his books and articles had established him as a cultural critic.

Cram was skeptical of modernism in all of its manifestations, particularly in architecture. He regarded Gothic as “the highest and best expression of Christian civilization.” When the New Yorker published a profile of him in 1926, it was titled “Seven Centuries Late.” Actually, “one century late” would be more like it. Cram’s writings have affinities with 19th century Gothic revivalists like John Ruskin and Augustus Pugin (who appears in the window of the nave’s Arts Bay). He shared with Pugin an idealized conception of the Middle Ages and, like Ruskin, advocated the revival of a crafts-based culture for the spiritual redemption of industrialized society. The mechanized slaughter of World War I appalled Cram and confirmed him in his convictions.

After LaFarge’s dismissal, the cathedral hired Cram as Consulting Architect. He was first tasked with designing two auxiliary buildings on the campus, Synod House and Cathedral House, and arranging the completion of the apsidal chapels. He personally designed the Chapel of St. Martin, an exquisite evocation of 13th century French Gothic. In 1916, Cram was elevated to Cathedral Architect and commissioned to complete the balance of the building, beginning with the nave. The project would occupy him until his death in 1942. 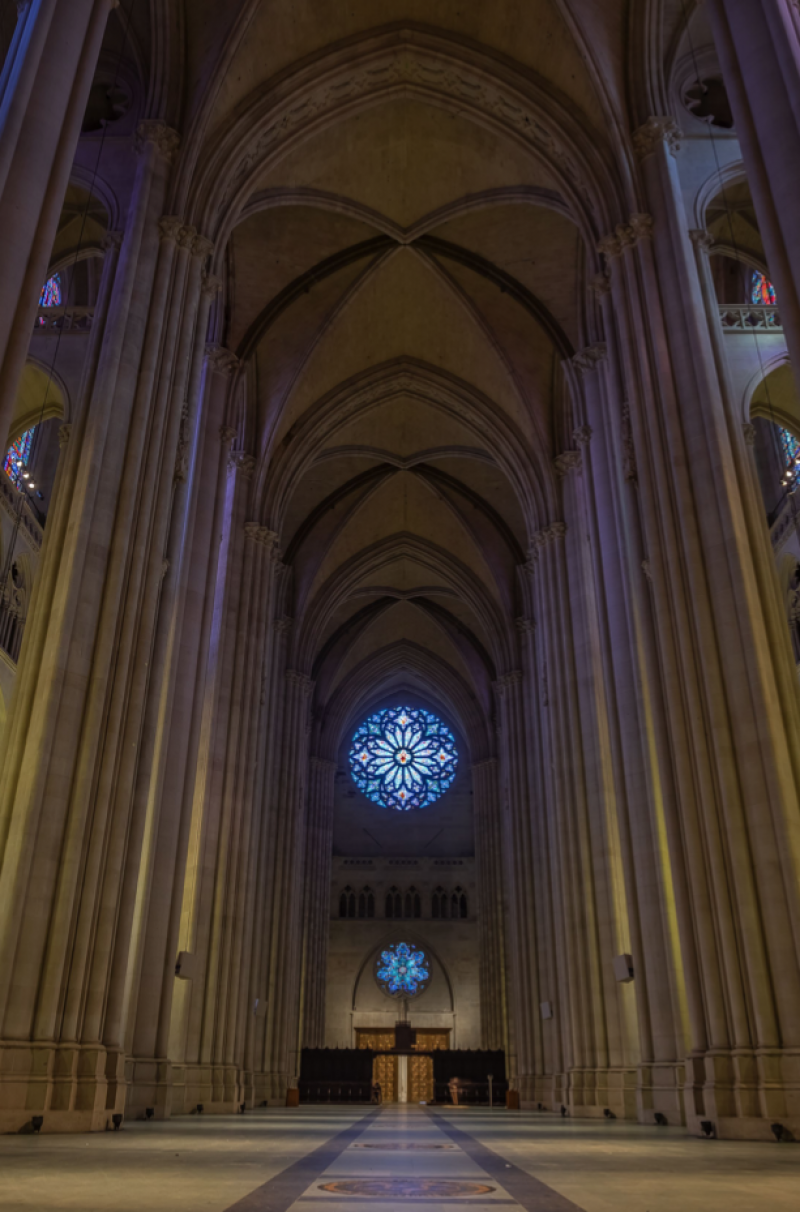 Cram’s austere nave, constructed 1925-39, embodies the essence of Gothic: majestic dimensions, soaring verticality and structural clarity. Every load-bearing element is visible. There are no hidden supports and no concrete or steel. The interior is Indiana limestone; the exterior, local granite.

Like its medieval predecessors, the nave is organically unified by a modular system of repeating structural elements and harmonious geometric proportions, e.g. the circumference of the great rose window equals the 124-foot height of the nave. Cram extended the nave 80 feet beyond the previous architects’ plan, resulting in a 601-foot length for the entire cathedral.

Critics bashed Cram’s nave as “antiquarian” and “archaeological,” disregarding the way he adapted traditional Gothic principles so that the nave would merge fluently with the older structure while maintaining its own stylistic integrity. Cram was imaginative, not imitative. 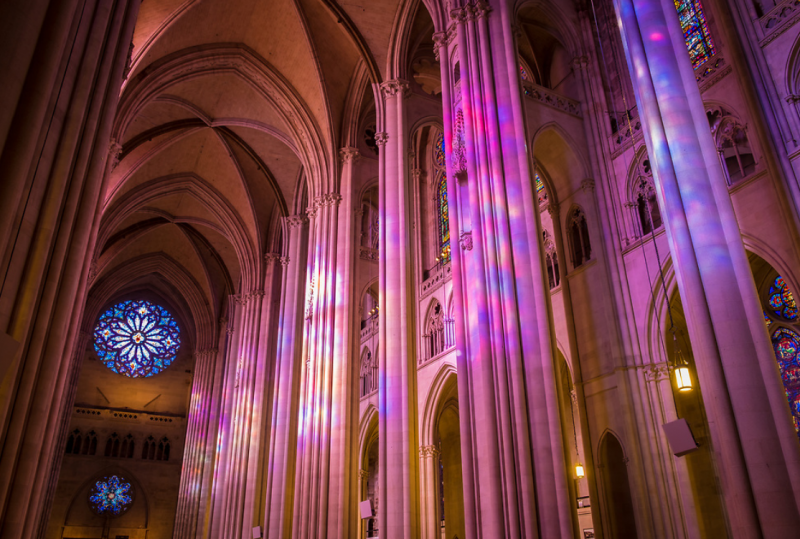 The nave is a drama of shadow and light. Splotches of pastels magically materialize on the limestone columns, cast there by sunlight streaming through the stained glass.

The photo shows Cram’s most dramatic departure from Gothic orthodoxy -- his displacement of the triforium from its usual location. The triforium is the gallery that customarily runs the length of the nave along both sides of a Gothic cathedral’s center aisle.

Cram set back the triforium, enabling the center aisle columns to soar uninterrupted to the base of the vaulting, thus intensifying the impact of the nave’s verticality and spaciousness. The center aisle of St. John the Divine is as close as a New Yorker can come to the experience of standing in a grove of giant redwoods. 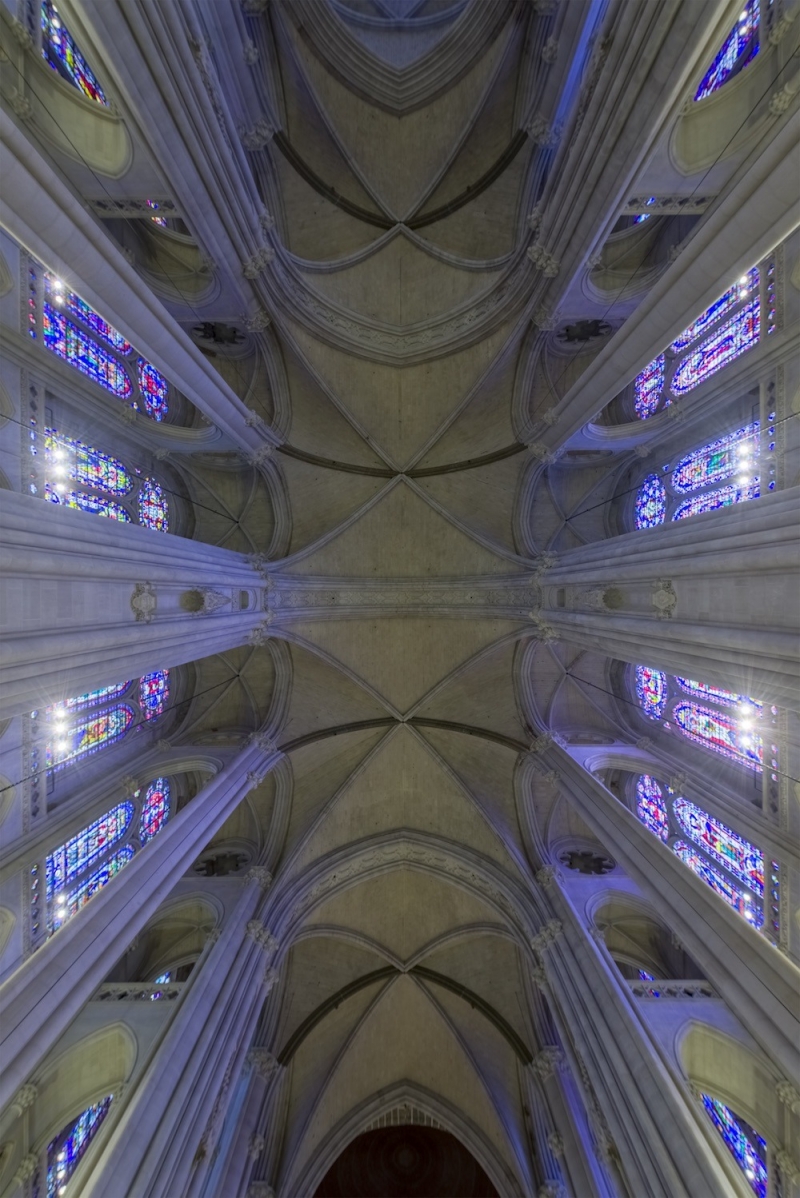 The breadth of the old Heins & LaFarge plan necessitated other adaptations of Gothic custom. The 100-foot width of the crossing required that the nave leading into it be at least double the width of any other Gothic cathedral. Cram was committed to honest masonry construction but how could the ribbed vaults span such broad aisles without collapsing?

Cram revived a technique used in 12th century early Gothic cathedrals. Known as sexpartite vaulting, it distributes the load-bearing among six ribs, rather than four, as in the X-shaped quadripartite vaulting seen in Chartres, Reims and other 13th century cathedrals.

Sexpartite vaulting fills the four square bays that comprise the nave’s center aisle, as seen in the photo. The columns supporting the ribs alternate in size, a departure from the medieval practice of columns of uniform width. The diagonal ribs bear the load to massive 16-foot diameter columns demarcating the corners of the square bays; the transverse (side-to-side) ribs to 6-foot diameter columns. (The discoloration of the transverse ribs is from a fire in 2001.) 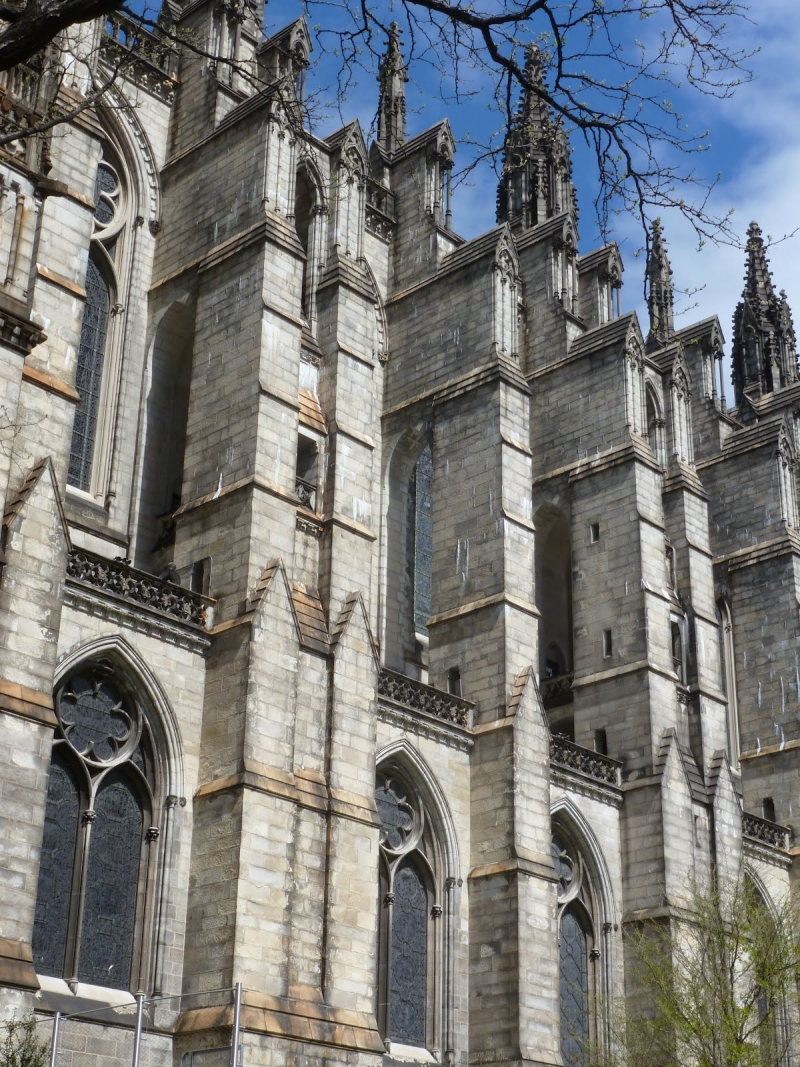 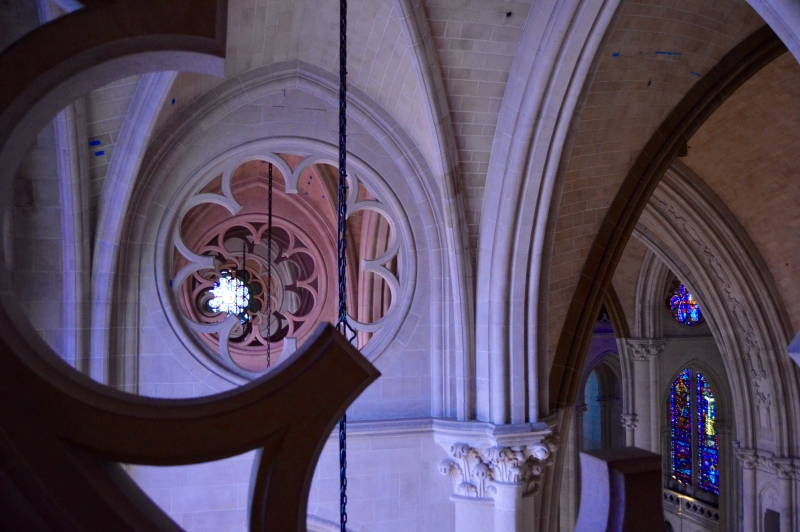 Cram’s most striking innovation is the series of eight-lobed oculi that run the length of the nave high above the inner side aisles, just below the vaulting, aligning precisely with the oculi of the lancet windows flanking the Great Rose. Another example of the nave’s organic unity, they are cut from the same template as the oculi atop the upper windows. To the best of my knowledge, this remarkable feature is unique to St. John the Divine among Gothic cathedrals. 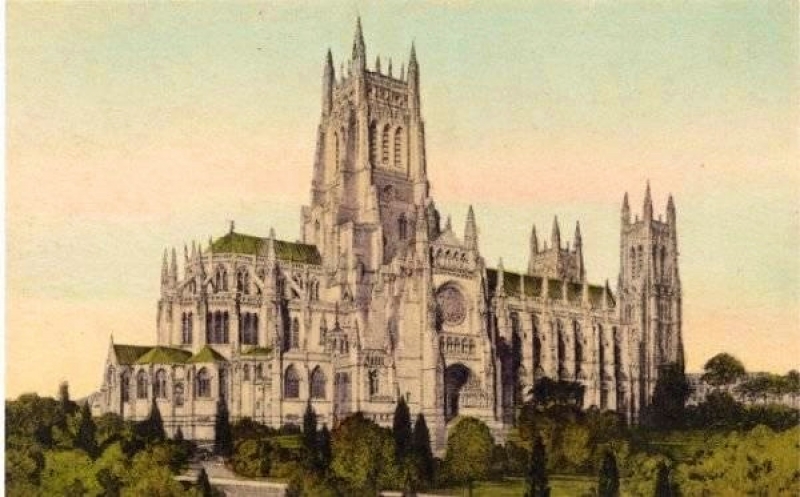 Cram attended the cathedral’s dedication service on November 30, 1941. One week later, the United States was at war. All construction halted. Cram died the following year with much of his design still unfinished – the transepts, the towers for the west front, the great crossing tower, and the “gothicizing” of some Heins & LaFarge features. Though Cram is gone, the firm of Cram & Ferguson is very much alive in Concord, Massachusetts and still designing churches.

No new construction occurred until the 1980s, when there was an attempt to execute Cram’s design for the western towers with labor provided by local youths trained on site in stonecutting. The initiative produced a portion of the southwest tower but proved financially unsustainable. There has been no new construction since 1994 and none is planned as the cathedral struggles to meet the immense cost of maintaining and preserving the existing structure. 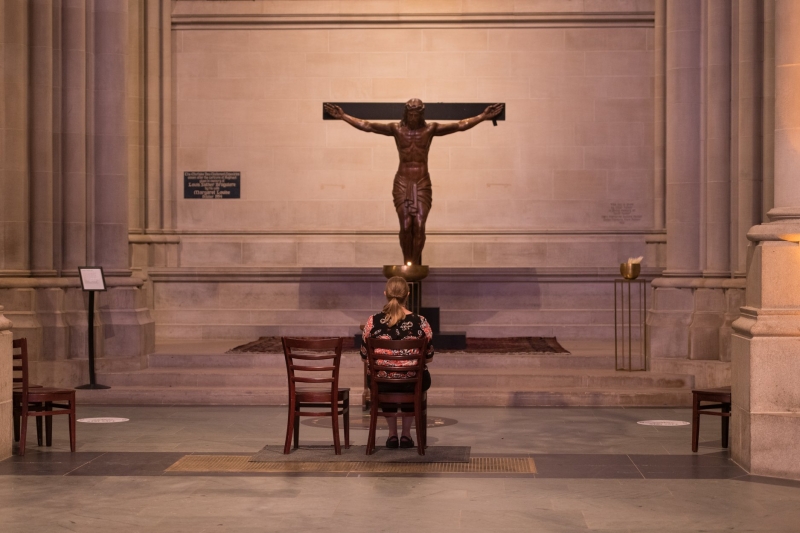 Critics had one response to Cram’s work but the public has had quite another. During my years as a cathedral guide, I have watched thousands of visitors stand awestruck by the grandeur of Cram’s nave. The space is as intimate as it is majestic. Countless New Yorkers visit it seeking solace. At any hour of any day, you are likely to see at least one person sitting there alone, praying, thinking, or simply sensing the presence of a loving God. The highest tribute to Cram that I’ve ever heard came from the visitor who said, “I don’t believe in God – except when I’m inside the Cathedral of St. John the Divine.” 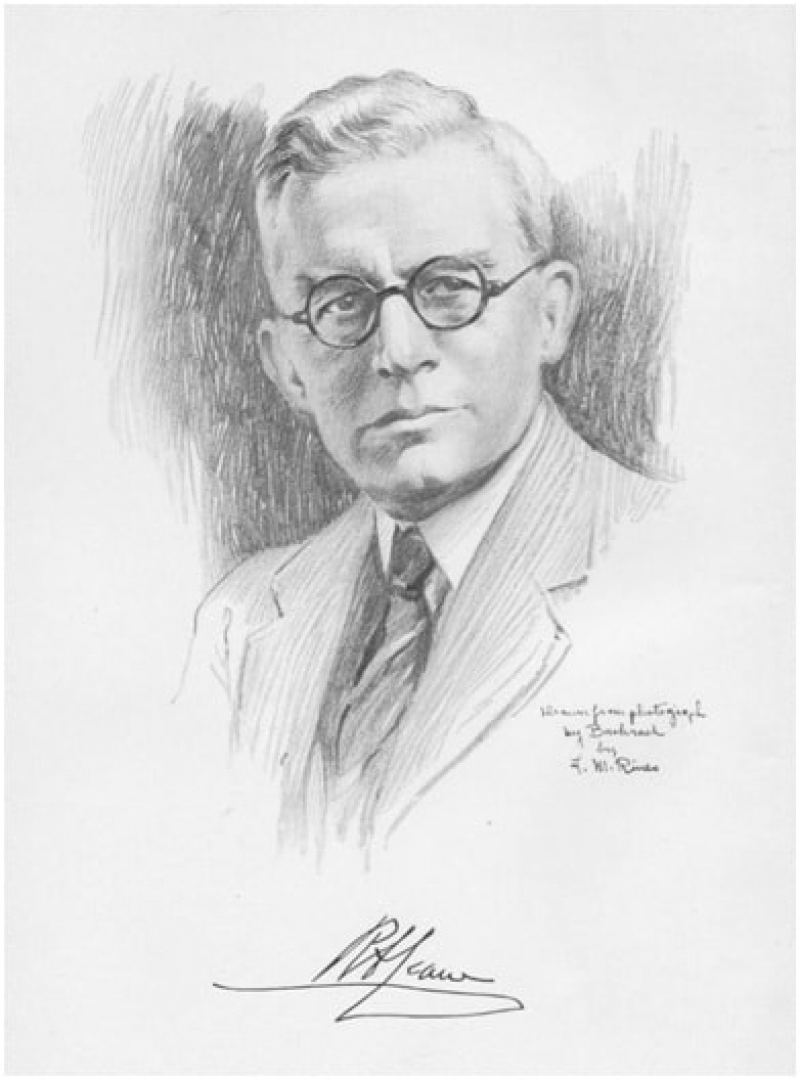 The Episcopal Church remembers Cram in its prayers annually on his birthday, December 16. Also remembered are architect Richard Upjohn and John LaFarge, a stained-glass artist, muralist and, ironically, father of the architect whom Cram replaced. The collect for the day follows:

Gracious God, we offer thanks for the vision of Ralph Adams Cram, John LaFarge and Richard Upjohn, whose harmonious revival of the Gothic enriched our churches with a sacramental understanding of reality in the face of secular materialism; and we pray that we may honor thy gifts of the beauty of holiness given through them, for the glory of Jesus Christ; who liveth and reigneth with thee and the Holy Spirit, one God, in glory everlasting. Amen.