#MuseumFromHome: Easy (and Tasty) as Pie Welcome back, lovers of food and culture! Welcome to another delicious tour of our seven chapels (and baptistry for good luck). Previously, we have visited our chapels through the cultural lens of donuts, pancakes, and candy. And with Thanksgiving right around the corner, now seems a good time to look into pies!

For those of you who have been following our culinary chapel tours, you know that our seven chapels are each dedicated to a different immigrant group that was coming into the United States at the time the east end of the Cathedral was being built. And since our chapels are currently closed for social distancing and we are not able to offer in-person tours, we like to offer online culinary tours of the Chapels of the Tongues. Call it a pie, a tart, a galette, if you bake a delicious filling in a pastry crust, we want it for Thanksgiving dessert!

As always, we start in the Baptistry, dedicated to the Dutch who settled New York, specifically the family of Peter Stuyvesant, the first governor of what was then New Amsterdam. If this pie seems as American as… well… apple pie, it is because this recipe comes to us not from the Amsterdam Dutch, but the Pennsylvania Dutch. In fact, Stuyvesant led his troops to take control of the colony of Pennsylvania in 1655. Luckily our relationship with pie is not as complicated as our relationship with colonizers. The Pennsylvania Dutch recipe we will be looking at is Shoofly Pie. Originally created as a sticky molasses cake, it was eventually put into a pie shell to make it easier to hold and frequently served for breakfast with black coffee. As you can imagine, a cooling pie that was filled mostly with molasses would often attract flies, which is where this pie gets its name. A similar cake in a pie crust from the region is the Funny Cake pie, which starts as liquid filling and comes out as gooey cake.

Our next pie comes to us from the Scandinavian part of Europe, which the Chapel of St. Ansgar is dedicated to. If you follow the seasonal delicacies at Trader Joe’s like we do, then you know how popular their Danish Kringle is. Oval in shape, Kringle is made from wienerbrød dough (similar to puff pastry) and filled with sugar, nuts, fruit, or most commonly, cream cheese. After it is baked in all its flaky, fluffy goodness, it is iced with a sugar frosting. In many ways it is similar to a Mardi Gras King Cake, though that is typically made from a brioche rather than a puff pastry. The hole in the middle of the Kringle makes it a great Thanksgiving centerpiece. Put some flowers or decorative gourds, or those pinecones your third grader had to spray paint gold and is very proud of, in the middle and slice it up for dessert!

St. Boniface is the German chapel, and from Germany we get a pie that would not be out of place on anyone’s Thanksgiving table. Kirschwähe is a cherry tart which feels tailor-made for the holidays. Rather than our typical cherry pies which have a delightfully sticky-sweet syrup, kirschwähe is made by filling a pie crust with cherries and then covering them with a custard made from eggs, sugar, cream, and lemon zest. It is baked until the custard settles and firms up around the cherries and is often served topped with sliced almonds and powdered sugar. The finished product has juicy red cherries peeking out from their custardy base. Can you think of anything more festive looking? 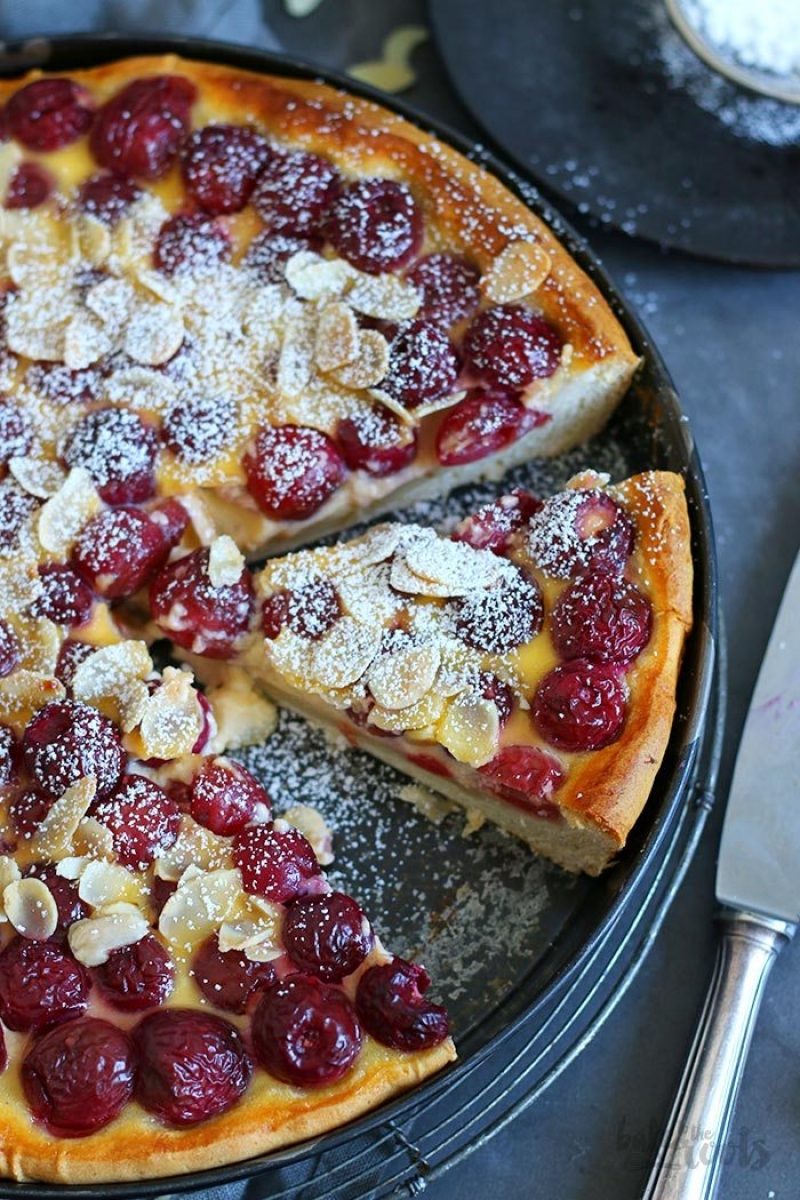 In the Chapel of St. Columba, the British chapel, we cannot help but think of the countless hours spent before and during quarantine watching the Great British Bake-Off and shouting, “I could totally make a Victorian sponge swiss roll. Who do you think you are, Mary Berry?!” Though the show is rife with cakes, British pastry always seems to come back to pie: pasties which are like hand pies, pork pies, gala pies, and the list goes on. If you can wrap it in pastry and bake it, it will probably wind up on a British lunch or dinner table. Even sweet pies like mincemeat pie are reminiscent of the British tradition of savory pies in name. While mincemeat did contain meat historically, since the mid 20th century you will find it with just fruits, nuts, and spices as opposed to pork, pate, or kidneys. But if you are more about the savory, you cannot go wrong with a traditional Shepherd’s pie, even if there is no crust. Ground lamb with peas, carrots, and onions, baked in a casserole dish with a healthy helping of mashed potatoes on top. We could even see this being just slightly amended if you’re looking for something creative to do with your Thanksgiving leftovers! Sweet or savory, soggy bottoms are never an acceptable replacement for flakey pie dough.

The Chapel of St. Savior honors Eastern Orthodox people and their rich and varied cultures, and we would be remiss in the Greek diner capital of the world if we did not take a closer look at the Greek spanakopita. Similar to börek from other nearby countries, spanakopita features buttery phyllo pastry stuffed with spinach and feta cheese. Spinach pies are sometimes large affairs that can fill an entire baking tray but can also be individual handheld pastries. If you do not know what we are talking about, next time you visit the Cathedral, pop across the street to the Hungarian Pastry Shop where they make a bang-up spinach pie. And if you have been to the Cathedral but have not been to the Hungarian Pastry Shop across the street… get on that! Seriously, and although we are not affiliated with them, we cannot recommend them highly enough.

The Chapel of St. Martin represents French peoples, and in our case the seemingly infinite varieties of patisserie to come out of France. One among all the options stood out to us this year in particular. If you are looking for a dessert that is as upside down as you have been feeling between holiday stress and pandemic panic, look no further than the Tarte Tatin. Fruits, traditionally apple, are arranged on the bottom of the pan with a luscious caramel. The fruit filling is then topped with puff pastry and popped into the oven where the magic happens. After baking, the whole thing cools and gets turned upside down so that the top becomes a bottom. 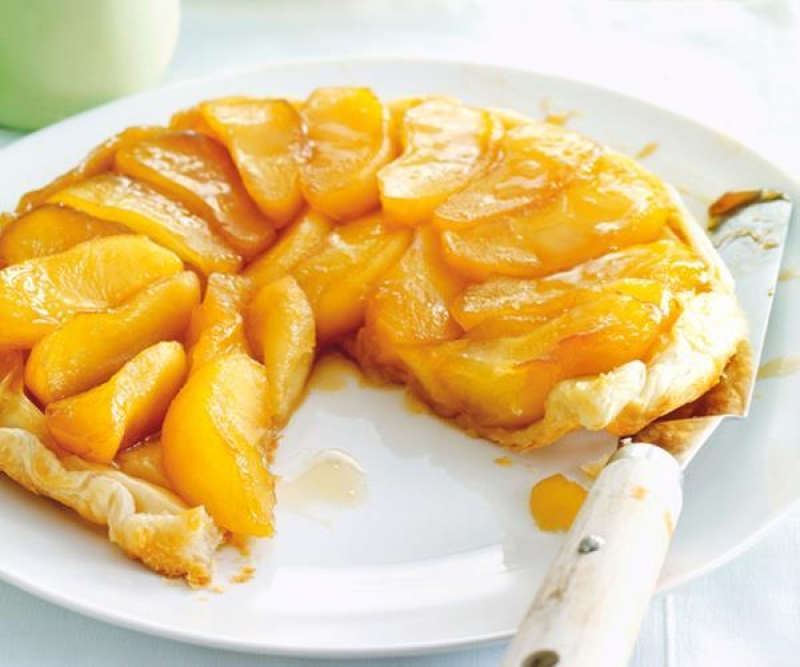 The Chapel of St. Ambrose brings us to an Italian sweet that is more tart than pie: the crostata. Buttery short-crust pastry commonly contains fruit preserves, typically with chunks of fruit to chew on which makes it different from an Italian torta. However, they do come savory with meat, vegetable, or even fish filling. Traditionally these would have fillings like prosciutto, artichoke hearts, or shrimp. There are also some 16th century variations, like those found in the cookbook Opera dell'arte del cucinare, which you probably would not find at a bakery today. Turtle and eel, frog, and oyster feature in some of the inventive recipes of Bartolomeo Scappi. For our part, we will stick with more recent crostata fillings, like ricotta cheese or nutella.

Last but not least we will cut ourselves a slice of Tarta de Santiago, or the cake of St. James which shares a namesake with our Chapel of St. James, dedicated to Spanish-speaking people. This tart/cake/pie is usually decorated with the cruz de Santiago or the cross of St. James in powdered sugar on top. We are considering it a pie since it sometimes has a puff or short-crust pastry base. The flavor and filling of this treat is all about almonds, and there are actually strict standards in place around what qualifies as a “true” tarta de Santiago. In 2010, the European Union issued a PGI or protected geographical indication that dictates any tarta de Santiago that wishes to qualify must be made in the Autonomous Community of Galicia and must contain at least 33% almonds. And we thought we took our sweets seriously!

And now we have our own pies in the oven we need to tend to! We wish everyone a very happy Thanksgiving, whatever traditions you are celebrating in this untraditional time. Whether you are having a family Thanksgiving, a “friends-giving,” or a “Covid-bubble-giving” (we just made that one up), we hope you have much to be thankful for. And pie. We hope you have pie. We will be back next month with festive drinks to keep you warm from Christmas through the New Year.