Museum From Home: Chapels as Pancakes Hi, Cathedral blog readers. Ashley and David here. If you’re like us, you’ve made a lot of pancakes during quarantine. Between the two of us, we’ve made banana pancakes, chocolate chip pancakes, blueberry pancakes, funfetti pancakes, and waffles. But we don’t care about waffles right now. Because it’s September 26th, National Pancake Day! 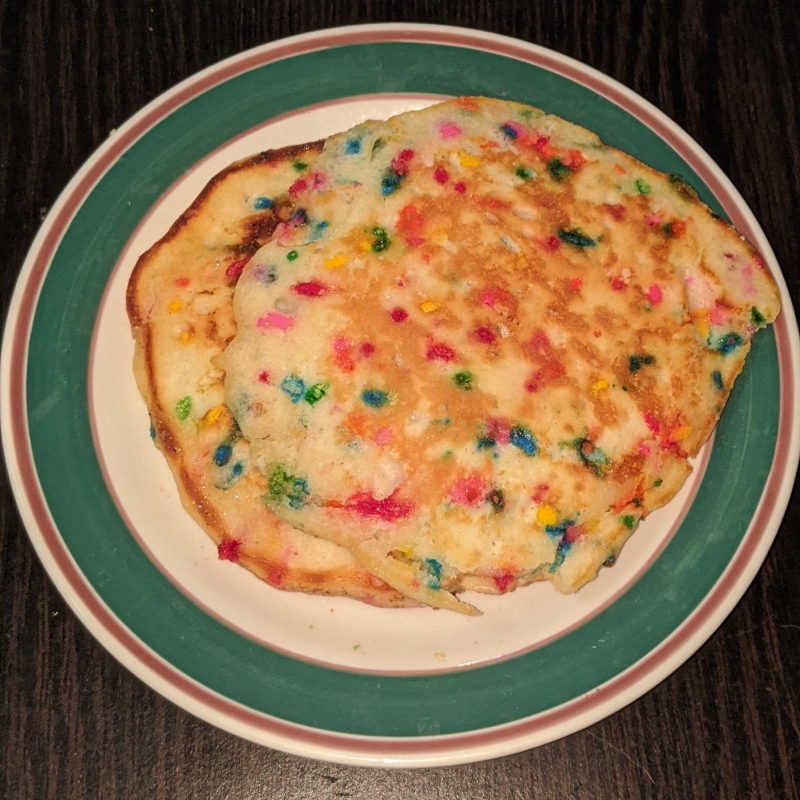 As a part of the Cathedral’s slow and safe reopening plan, the whole building is not yet accessible, including the Ambulatory and the seven Chapels of the Tongues, each of which is dedicated to a different immigrant group entering New York Harbor around the turn of the century when the Cathedral was being built. To celebrate our beloved chapels and beloved pancakes, we’d like to take you on a pancake tour of our chapels!

Pancakes, flat grain-based cakes often cooked on a griddle or stovetop in contemporary times, have a history that goes back at least 5,300 years to Otzi the Iceman. Bits of charcoal were found with ground einkorn wheat which led scientists to the ultimate conclusion about one item in this Bronze Age person’s diet: ancient pancakes! From the pre-Columbian corn-based arepa to the small Russian and Ukranian blini, pancakes have proliferated for centuries and nowadays there are as many cultural interpretations of pancakes as there are Chapels of the Tongues… even more!

Let’s begin in the Baptistry which is dedicated to the Dutch immigrants who settled what was originally New Amsterdam, where we get our Avenue’s namesake. From the Dutch we get pannenkoeken, very close to what we’d recognize at IHOP, though typically larger and a bit flatter. In many ways it’s similar to a French crepe, but let’s not get ahead of ourselves. That’s another chapel entirely. In the Netherlands and Belgium, pannekoeken are traditional birthday dishes, and much like our International House of Pancakes, they have pannenkoekenhuizen or pancake houses. The Dutch also colonized South Africa, where the tradition is to sprinkle them with cinnamon sugar and roll them up, as opposed to the European tradition of eating them with treacle or apple butter.

Moving along, we go to the Chapel of St. Ansgar, the Scandinavian chapel. In our last blog we discussed aebleskiver, the round fluffy baked donuts also known as Danish Pancakes. Though we discussed them in the donut blog, these spherical balls of carbs and goodness live in a world somewhere between donuts and pancakes. They look like little donut holes, but are made in a pan especially designed to get that perfectly round shape. For a more traditional looking Scandinavian pancake, we take a look at blodplättar or Finnish blood pancakes! Blood is an ingredient that is known to be used in savory dishes like British blood sausage or German blood stew. But this morning, blood is on the menu for breakfast! These pancakes are made with whipped animal blood and turn a rich burgundy color as a result. They are sometimes made more savory with the addition of onions and spices, but on their own they are typically served with lingonberry jam. However if you don’t happen to have any of that in the pantry, Wikipedia tells us that reindeer meat will also do.

As we head into the German Chapel, St. Boniface, we get a pancake with a bit of a misnomer. Dutch Babies are almost like an upside-down popover. They’re cooked in a cast-iron skillet and rather than being pan-fried, they are baked in the oven. While they bake, they curl up along the sides and can then be filled with fruit, powdered sugar, or syrup. “But David,” I hear you call… “But Ashley,” I hear you cry… “I thought we’ve already been through the Dutch chapel back at the Baptistry.” You are correct. The actual term for this type of pancake is a bismarck and it originates from Germany. However, they were popularized at Manca’s Cafe in Seattle, and Victor Manca’s young daughter couldn’t pronounce the word “Deutch.” Hence, the birth of the moniker Dutch Baby!

The Chapel of St. Columba is the British chapel and from the Brits we get crumpets. Crumpets are fluffy griddle cakes that have a little more heft than traditional pancakes, but also have beautiful little holes into which a pat of butter can melt and become absorbed. Unlike the nooks and crannies in an English muffin, crumpets are softer inside because they are made with batter instead of dough and cooked on a griddle with a metal ring to hold their shape rather than baked in an oven. Like many pancakes, crumpets can be served either sweet or savory, but with breakfast jam, clotted cream, and a nice English tea does the trick!

If you love pancakes, you love carbs. And if you love carbs, you love potatoes. You probably won’t have a potato pancake for breakfast, but you know what? There’s a pandemic and who are we to judge your life choices? The Chapel of St. Savior is the Eastern Orthodox chapel, which is where latkes hail from. Traditionally served at Chanukah (along with other oily and fried foods to commemorate the oil that lasted 8 days in the fallen temple), we have no problem eating latkes all year round. Unlike most of the examples here that are typically sweet but can sometimes be served savory, these are usually exclusively savory pancakes, often made with onions and spices. That doesn’t mean you can’t add a sweet element. In most Jewish households, latkes are paired with applesauce. If you’re not keeping kosher, the other option is sour cream (which would only be considered traif if eaten with a meal that contained meat). However, we’re going drop a quarantine breakfast hot-take on you: we know we said we don’t care about waffles before, but you can take your latke mix and pop it in the waffle iron. You get that beautifully crisp outside, flaky potato goodness on the inside, and plop a fried egg and some hot sauce on top of that bad boy. Your quarantine bubble will thank me. Promise.

In the French Chapel of St. Martin, we come across a particularly thin pancake. Wheat or buckwheat, crepes have served as the perfect vessel for any number of sweet and savory fillings since the 12th century. Imagine walking into a crêperie in Brittany, the birthplace of crepes, and smelling lemon and sugar on a sweet wheat crepe. Or maybe you prefer ham, cheese, and egg nestled into the savory folds of a buckwheat galette. Stuffed to the point of overflowing with fruits, chocolate spread, and whipped cream? Pesto and vegetable? If you’re feeling particularly decadent, Crepes Suzette might be the way to go, flambeed tableside in liquor with orange and sugar. Crepes, called crespes in some French medieval manuscripts, no matter the filling are best prepared using a special flat pan with flared edges called a galettière. If you’re in a pinch at home though, a large non-stick will do. 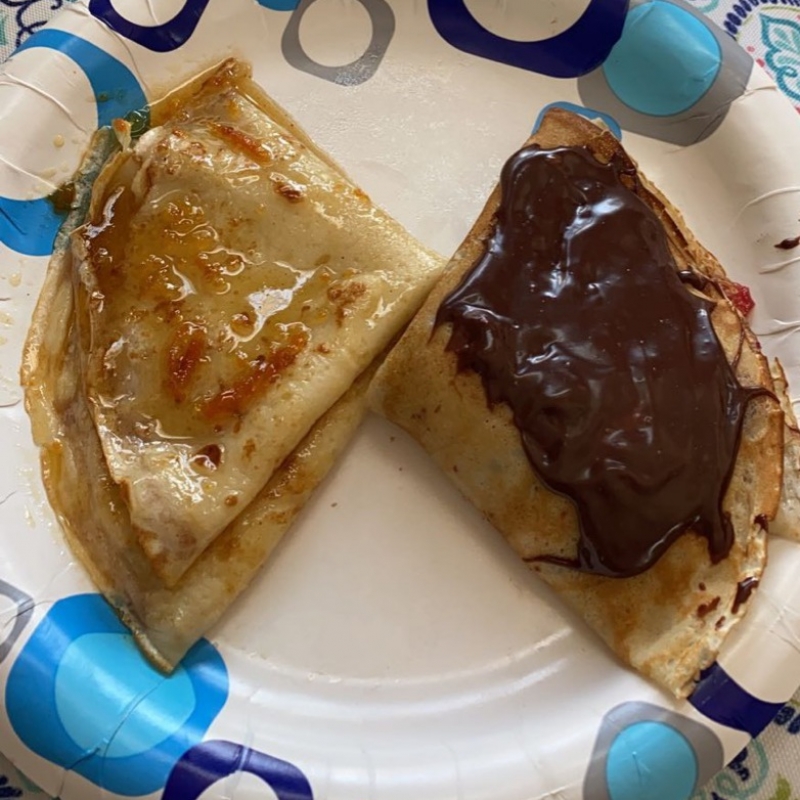 Ashley’s cousin Alyssa made crepes because we’re all getting in on the pancake game.

The Chapel of St. Ambrose is dedicated to Italian immigrants, though depending on where in the country a person comes from their approach to Italian food can differ drastically. Farinata is an unleavened chickpea pancake that comes from the area of Genoa. Now cooked at very high heat like in a brick pizza oven, these savory pancakes have a history that some purport go back to Roman soldiers cooking a quick snack on their shields. Farinata is very similar to French socca in both ingredients and simplicity of eating, but try these naturally gluten-free pancakes as a fun pizza crust alternative, or in memory of the bee-associated St. Ambrose, drizzle a little honey while they’re warm and fresh.

As we go into the Spanish Chapel of St. James, we could talk about filloas, a Spanish style of crepe, but St. Martin seems to have crepes covered. Instead, the tortilla espanola is what we might consider a savory pancake. Round in shape from being cooked in a pan, is that not what a pancake is? Tortilla espanola or tortilla de papas starts with potatoes and onions essentially poached in a very generous amount of olive oil. Traditionally you want them tender but not browned, but if you wanted a little crisp who’s to tell you no? You can save extra oil for other culinary projects in a mason jar, but the potatoes and onions once cooked are added to beaten eggs and poured back into the pan. Much like American style pancakes, the tortilla espanola requires a flip halfway through cooking. The result is a potato-packed fluffy egg cake that will surely impress the next time you’re allowed to have people over for brunch.

So there you have it. A pancake for every day of the week, plus a Baptistry bonus for your Sunday Brunch (which you’ll enjoy, no doubt, while watching our live-streamed 11am service). Keep quarantine strong, readers. We’ll be back next month with a chocolate flavored blog, just in time for Halloween!

This is very interesting- I wonder if the Saints for whom the chapels are named would have been able to eat these recipes; that is, would these recipes truly have been concurrent with the saint? At any rate, seems like a blog post that sound be repeated for Fat Tuesday. Blessings!