Photo: Over the months before the 2019 Palm Sunday fire this icon was hanging in the Baptistery of the apse of the Cathedral. It is now in its intended home, Trinity Church, Wall Street.

Icons are transcendent images. The have a rich ancestry, comment on the present time, and have implications for the future. Throughout 2019, the Cathedral exhibited a contemporary icon called Our Lady, Mother of Ferguson and All Those Killed by Gun Violence written by an Episcopal deacon, Mark Dukes. This piece tackles the violence the Black community has endured for many years. The icon of Our Lady of Ferguson is a challenging image that is the intercession between an ancient, traditional art form and contemporary issues.

The word icon, comes from the Greek, eikon, meaning image. We know them better as images we click on our smart phones but for the Eastern Orthodox community, they are windows into the divine — daring to bring us into presence of the holy. They are sacramental, as sacred to Easterners as Holy Communion. In fact, iconographers will fast before they undertake the task; their communities pray for them as well during the process. It is a holy task of seeking the Divine presence.

Icons can be painted (traditionally egg tempera) on a wooden panel, a wall mural, or done as mosaic tesserae. One does not paint or create an icon; one writes an icon. This is writing like ancient Egyptian hieroglyphics. Similarly, the iconographer has a whole vocabulary of symbolic portrayals, imagery, and geometry, all based in a long history respecting what has gone on before in this symbolic language over the centuries. The iconographer follows the prototype from a rich ancestry of imagery.

The emphasis on the prototype is based in the concept that if the iconographers are faithful to the early portrayals of Jesus, Mary his mother, the disciples, and saints — the results will more likely bring to the present time a closer resemblance of the faces of the holy ones. Yet respecting the prototype is not slavish copying but taking inspiration from that which went before. So the individual iconographer has their style and is allowed to express it through their own technique and charism, but it is based on that which was done before, making a continuity with the past and celebrating the immediacy of the divine presence now and into the future. 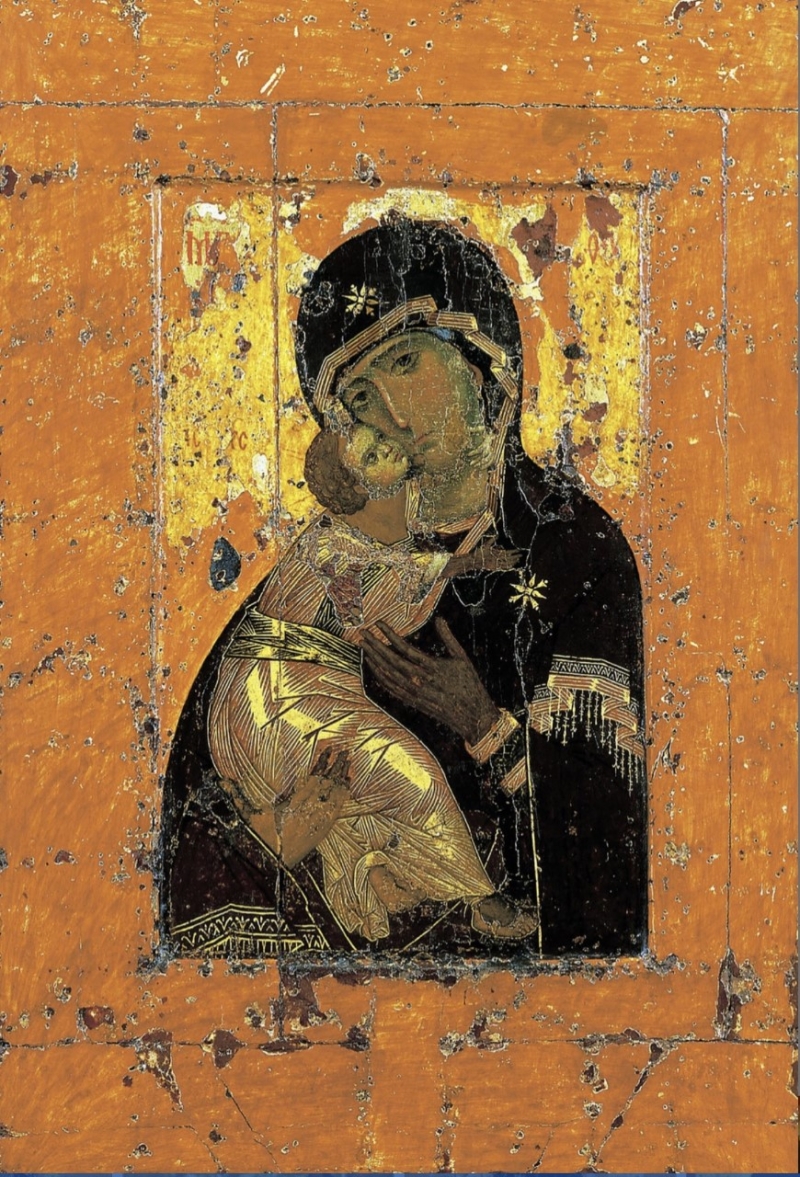 Photo: The Vladimir Madonna — actually a Greek icon from the 1100’s. The style is called Eleousa — Virgin of Loving Kindness with the child, Jesus, is held to the cheek. Notice the size of the child is not a baby but larger — the God/man thus the Eastern community calls her the Theotokos – the Godbearer and not by the Italian name, Madonna.

In the above image, notice the child Jesus has one foot covered; the other sole of the foot is bare. This is a reference to the Burning Bush experience of Moses and the directive from the voice emanating from the bush — “Remove the sandals from your feet, for the place where you stand is holy ground.”(Exodus 3:5) 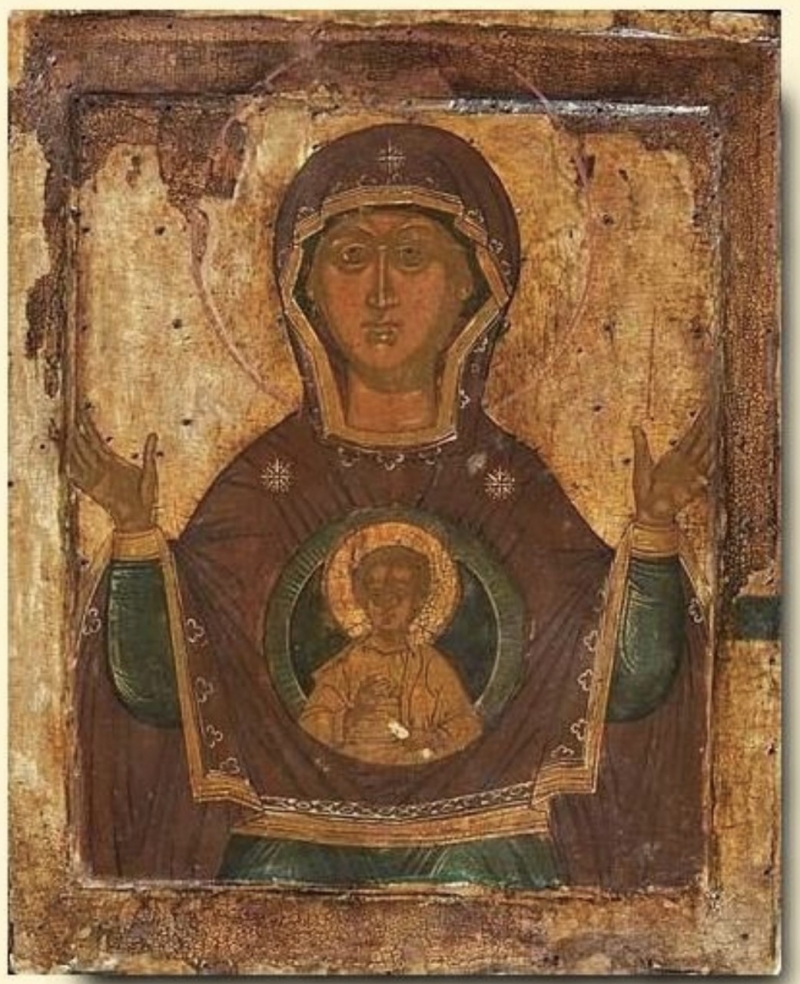 This icon is a traditional Russian icon painted on a wood panel in egg tempera c. 1800, The Virgin of the Sign. This style is called Znamenie, a Russian word for sign. Mary is shown with Jesus placed in a medallion, a circle in the center of her torso — the Christ child/man in her heart or womb. She is holding her raised hands, her palms open, in the Orans position, a traditional posture of prayer over the ages for pagans and Christians alike. Mary is shown, dressed in a maphorion, a robe of darker fabric which covers her head and body.

This traditional icon has the Greek letters in Jesus’ halo, ‘ο ων (pronounced Haw) Own — the Being — again from the encounter of Moses with the Burning Bush: The voice speaks its theological reality, “I am who I am” (Exodus 3:14) — I am the one who calls all things into being. It is believed that Jesus, the Second Person of the Holy Trinity, was always present In the Godhead, even when the universe was created, otherwise known as Preexistence. 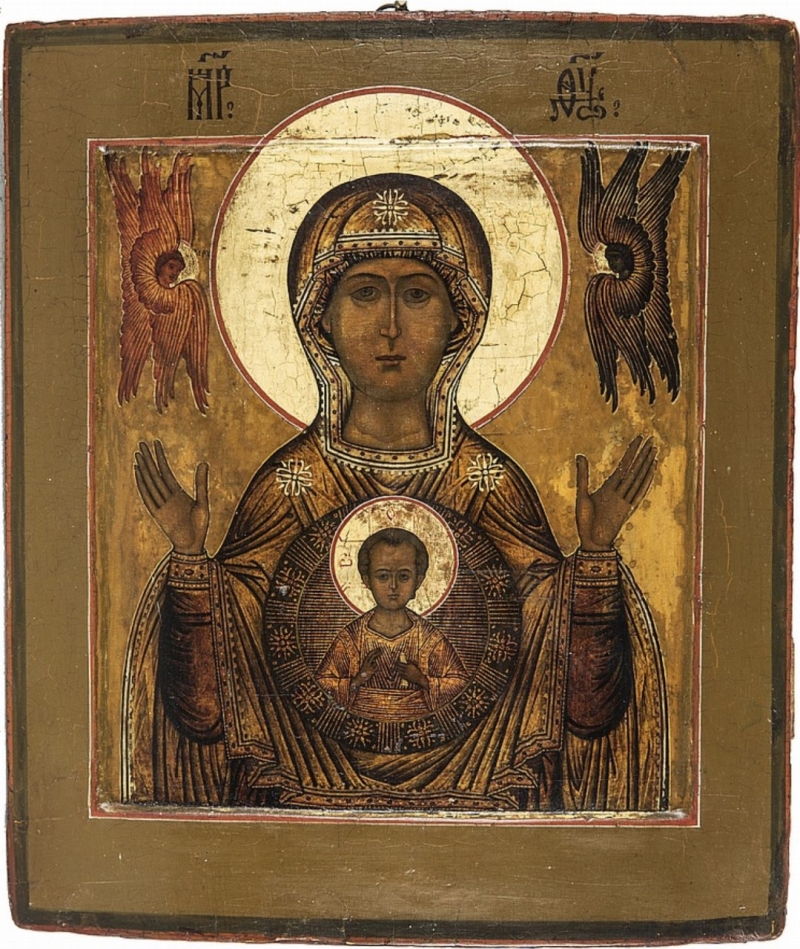 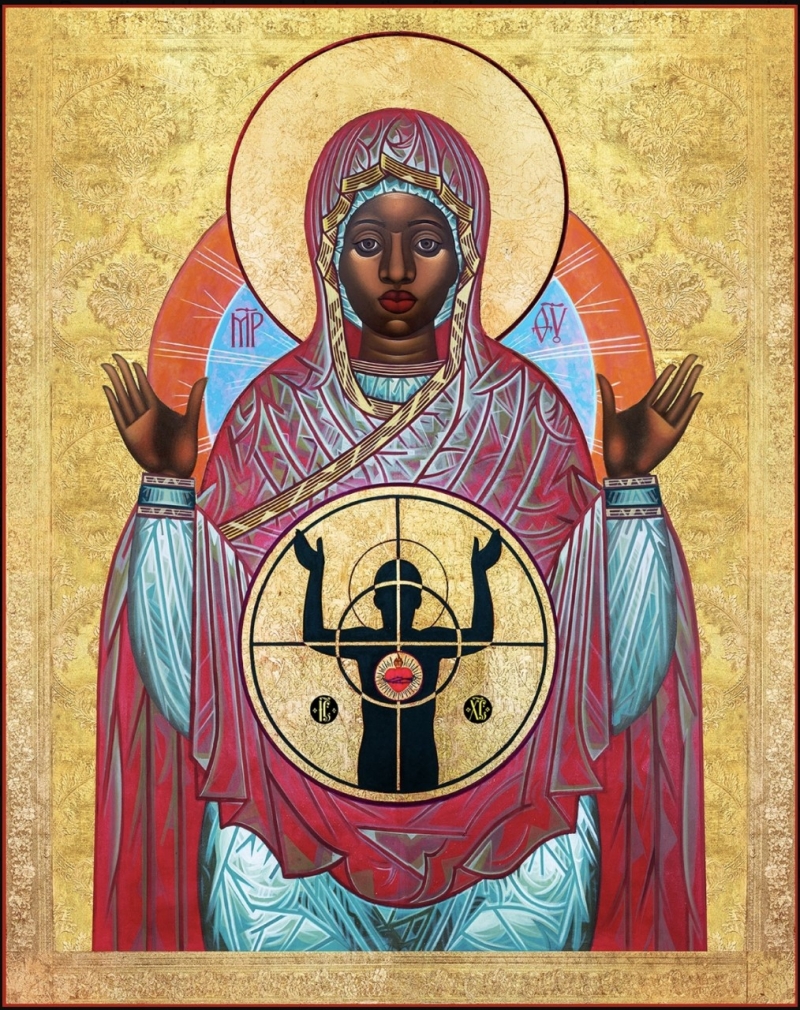 Our Lady of Ferguson, and All Those Killed by Gun Violence is a contemporary interpretation of the ancient icon style. In it, Dukes shows Mary, a Black woman, a mother, and the traditional place of her child as a man raising his hands in the air, surrendering. The stunning and chilling aspect of the icon is that this man, identified with Jesus, is in a gunsight.

Besides the triangular imagery, notice all the circles as well. These haloes are the aura of God's holiness, and the writer traditionally identifies each figure. In the blue halo, there are Greek letters. The Greek MP (MaRa, pronounced Ma-rah) and ΘΥ (Theta and Upsilon, Theou) a short e sound and u, which identifies the larger figure as Mary of God. In the smaller circle, Mark Dukes likens the figure in the gunsights to Jesus. Near his elbows, we see the Greek and Cyrillic letters, IC & XC — Greek Iota for J & Cyrillic C for S; the Greek Chi, X, for the K sound and Cyrillic C for S -- the identifying letters for Jesus Christ. The stained-glass program of the Cathedral of St. John the Divine is a good example of this tradition of identifying the figures in its iconography, even in a neo-Gothic building. 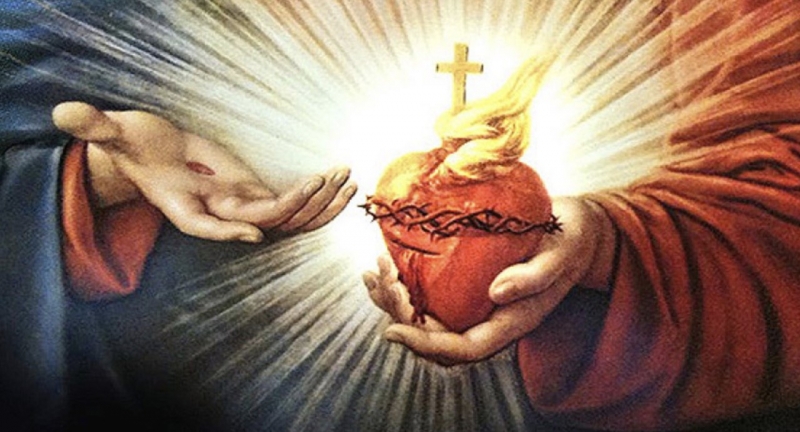 The man in the gunsight also has the traditional 19th/20th century Sacred Heart of Jesus – a heart surrounded with the crown of thorns. This is Jesus’ heart of love for us, taken from the imagery of Isaiah’s servant poems (53:5): “He was pierced for our offenses.” It is also the imagery of the crown of thorns placed on Jesus’ head by the Roman soldiers. This symbolic presentation now juxtaposes the traditional Jesus image with an implied silhouette of a Black man in a gunsight. This ancient looking contemporary icon seems sadly appropriate considering the current contemplation of and protesting violence against African Americans.

Icons present this universal sense of the spiritual world and the Divine presence in our lives. They transcend all time and show our own place in the circle of God’s expressed love for all of us. When Jesus was asked by the young scribe what is the greatest commandment, he references two. The first is from Book of Deuteronomy: “Hear, O Israel . . . You shall love the Lord, your God, with all your heart, and with all your soul, and with all your strength.”

Jesus then quotes from the Hebrew Book of Leviticus as the second of greatest commandments, which seems to be the emphasis of Our Lady of Ferguson — “and to love your neighbor as yourself.” This contemporary icon has the silhouette of a human being, hands in the air — and identifies this image with Christ himself! May the future implication in the imagery of this icon be the hope for the arrival of this reality.

2 Corinthians 13: 5, 11-12 — “Do you not realize that Jesus Christ is in you?” “Finally brothers and sisters, rejoice. “Mend your ways, encourage one another, live in peace, and the God of love and peace will be with you.”