Like many during the coronavirus pandemic, David Rigano, a Cathedral Visitor Services Associate, took a deep-dive into baking and ate his way through the connections between the Cathedral’s Chapels of the Tongues and fried pastries.

After a few months of closure during the pandemic, the Cathedral has reopened for personal prayer with limited hours and access and while we welcome those who may return safely, we also realize that due to distance and health concerns, many still find it more appropriate to stay home. For all those out there that want to be here but can't, I thought that until you can come visit our chapels in person again, I'd give you a tour. But not an ordinary tour. I want to give you a tour utilizing something that has gotten me and many others through our quarantine: frying dough.

The donut we’d recognize today, the round, pink kind that Homer Simpson eats, can be traced back to Dutch immigrants settling in New York City, what was then known as New Amsterdam, as described by Washington Irving in 1809. Their oly koeks wouldn’t get the signature hole in the middle until 1847, and they became the gorgeous rings of fat and carbs we love. So, thanks Dutch settlers. The Cathedral’s baptistry was financed by and dedicated to the family of one quite famous Dutch settler: Peter Stuyvesant, who was the last Dutch director-general of New Amsterdam before it was dubbed New York by the English (we’ll get to the English in a bit).

But, of course, the Dutch aren’t the only ones who fry dough. In the early part of the 20th century, New York City was a hub for immigrants coming to America helping to create the diverse American melting pot. This was right around the time the east end of the Cathedral was being built, which houses the Ambulatory, the Baptistry, and what would be dubbed the Chapels of the Tongues because each one is dedicated to an immigrant group that was coming to America around that time. So, take a walk through the ambulatory with me, and we’ll look at how each culture represented in the chapels fries their dough.

The first chapel after the baptistry is the Chapel of St. Ansgar, dedicated to Scandinavian immigrants. My personal favorite Scandinavian donuts are aebleskiver, or Danish pancakes. Unlike flapjacks, aebleskiver are round fluffy balls of dough that are fried in a pan specifically designed with spherical pockets to keep them in their perfect shape. While it’s not necessary, aebleskiver are typically coated in powdered sugar. (You’ll note that this will be a recurring theme.) However, I also found another Scandinavian fried dough called Rosette cookies. Unlike most traditional cookies that we’d think of, these aren’t baked in an oven. Rosette cookies are formed or cut into round snowflake-y patterns and then fried in hot oil. Incidentally, “rosette” is also a term for the round floral shaped stonework in the Cathedral!

The next chapel, the Chapel of St. Boniface, is dedicated to German immigrants. I’ll admit to being woefully ignorant to Germanic traditional fried dough, a flaw which I must fix as soon as possible. But in terms of cultural significance, I figured I’d go with the berliner, or the berliner pfannkuchen for long. The berliner is closest to what we’d call a jelly donut with fried yeast dough filled with jam or marmalade. It can be frosted or dusted in powdered sugar. (I told you that would come back.) John F. Kennedy famously said in 1963 “Ich bin ein berliner.” Me, too, JFK. Me, too.

The Chapel of St. Columba is the British chapel, and what I found is going to change breakfast for you all forever. “Fried Bread.” Now if that doesn’t already make you salivate, why are you reading a fried dough blog? Most of these dessert-y fried dough recipes have a lot in common, but this one is for breakfast. Rather than making dry toast to go with your bacon and eggs, this British recipe recommends that you cook your bread in the bacon fat next to the egg, and then serve the fried egg on top of the fried bread. This will be making an appearance in my kitchen soon, and is probably something most of you can make during this time of quarantine with what you already have at home.

Next is the Eastern Orthodox chapel, the Chapel of St. Saviour. This culture brings us two polar opposites, both sounding equally delicious. In the dessert column, we have khvorost, fried dough that is cut into flat noodle shapes and dusted in sugar. On the savory side of things, they have piroshki, a fried meat pie in a yeast dough that can also be filled with mushrooms, cabbage, onions, or cheese. Frankly, I’d like to know if there’s an “all of the above” option.

The Chapel of St. Martin is dedicated to the people of France, and this brings us to a fried dough that many people are probably familiar with, even if only from the movie The Princess and the Frog. This French tradition carried over into the fabric of our American culture as a staple of New Orleans cuisine: beignets! These fluffy clouds of joy coated in powdered sugar are served most famously at Cafe du Monde in the French Quarter with a cup of rich hot chocolate. 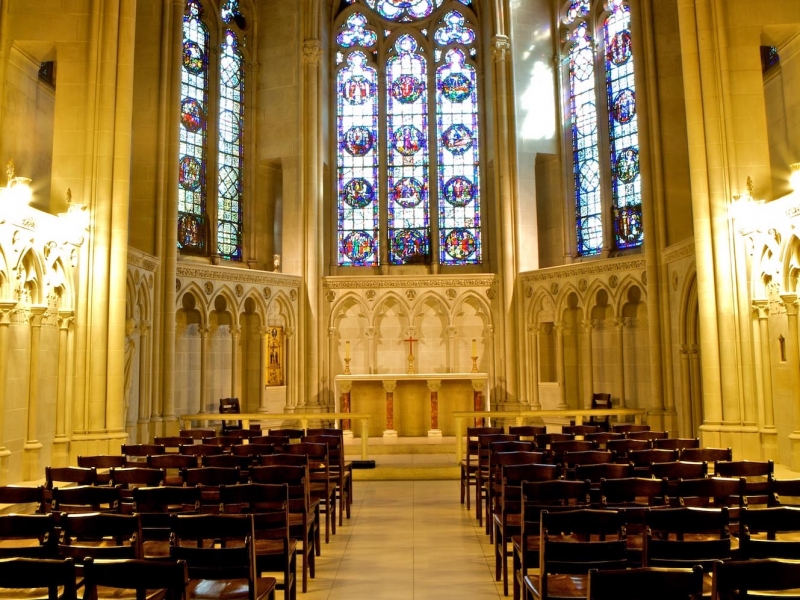 The Chapel of St. Ambrose represents Italian immigrants, like my great-grandparents, and reminds me of the fried dough I grew up with. A close cousin to the beignet, zeppoli are denser and chewier, but also come in white paper bags covered in powdered sugar. Zeppoli batter, like beignet batter, is typically made without yeast—making it so fluffy—and with thick, textured Italian ricotta cheese—making it dense. Two sides of a delicious, deep fried coin.

The seventh and final chapel is the Chapel of St. James, the Spanish chapel. From Spanish culture we get another kind of donut that has become a staple of New York City culture. They can be as tall as a small child, are covered in cinnamon sugar, and you can buy them while you wait for the subway. Churros. Long, skinny poles with crunchy outsides and soft, chewy insides and flavor that stays on your fingers long after the churro itself is gone. 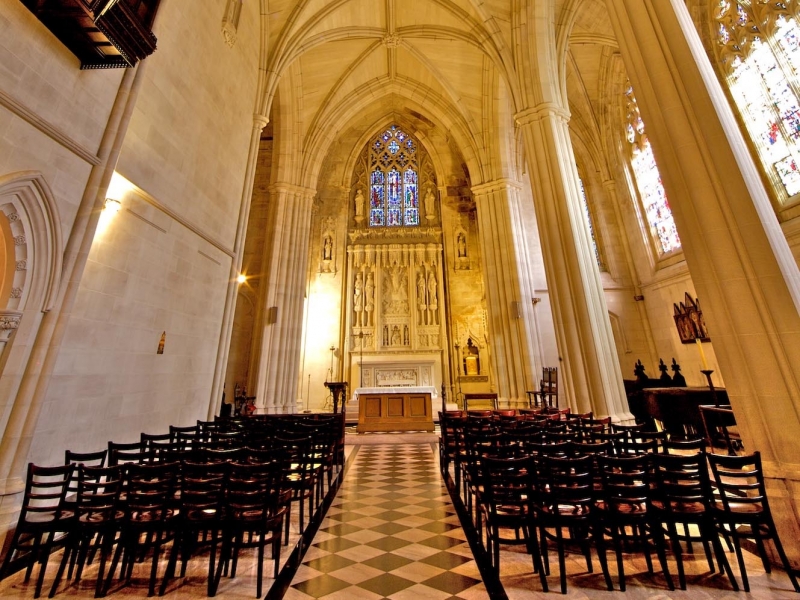 These are the cultures represented in the Chapels of the Tongues, the cultures who were predominantly emigrating to the US in the early part of the last century, but my research showed that every culture has a signature fried dough recipe or two.

If you want to try making your own donuts at home, I found this video with a very easy “2 ingredient” recipe. (She’ll explain why it’s not really two ingredients, but it’s still super easy.)

I made some of these myself this week, and though I don’t have a piping bag and had to roll them out by hand, I think they came out great! 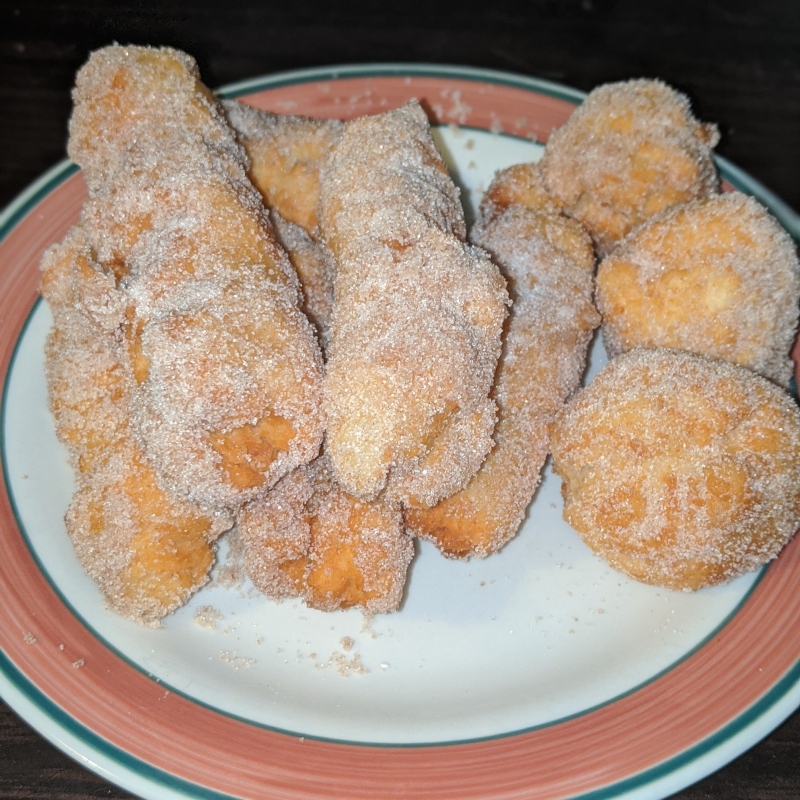 Let us know how your cooking goes!

A fun piece that only goes to show how all nationalities are really one. Thanks David.

This Sweet Tooth clip sweetened my spirits in prayer for the Cathedral and its wonderful outreach. God's Blessings to all.

Who would have thought that the link between these architecturally splendid chapels is---doughnuts! Thank you!