St. Alban in the Cathedral St. Alban holds a prominent place in the history of the Anglican tradition since he is the first person from Britain to be martyred in his homeland. He is thus depicted at the Cathedral St. John the Divine seven times. Recognized in both the Roman Catholic and Eastern Orthodox Churches, he lived in the third century.

The most definitive account of St. Alban was written by The Venerable Bede in his History of the English Church and People around 731CE, which is still in print. The story is as follows: In the early part of the fourth century, during a particularly savage persecution of Christians under the Romans, a Christian priest, traditionally named Amphibalus, traveling through the British city of Verulamium, now the city of St. Alban’s, was given shelter by a soldier called Alban. The soldier closely watched the priest and observed his intense prayer and devotion. During the days spent in hiding, the priest instructed Alban in Christian life and salvation. Alban was touched by the grace of God and began to follow the priest’s example and eventually came to believe that the way to salvation was through Christ and his resurrection. When the Roman soldiers finally discovered the hiding place of the priest, Alban had exchanged clothes with the priest and subsequently surrendered to the soldiers. He was brought before a Judge who ordered that he be decapitated. He was executed on the site where the English Cathedral of St. Albans now stands.

In the Christian cannon, artists depict him as a soldier wearing traditional armor, but since he is such an early saint, not much is known about him. As he was a Roman citizen, he is sometimes depicted with a laurel wreath on his head. St. Alban is the patron saint of converts, refugees and victims of torture.

The most prominent depiction of St. Alban in St. John the Divine is in the clearstory stained glass of the American History Bay. It shows St. Alban dressed in armor, holding an olive branch, the generic attribute for martyrs, and a sword, the instrument of his execution. Below that, St. Alban hears his sentence before a judge. This bay was originally named St. Alban’s Bay. In the Armed Forces Bay the saint appears again, dressed in armor like a soldier. The firm of Earnest and Lakeman made both windows.

On the north portal of the façade, there is an eight-foot statue of St. Alban with seven other well-known martyrs. This Martyr’s Portal, as it is commonly known, was designed by John Angel and carved by the Piccirilli brothers. Again, Alban holds an olive branch and a sword. The base of the statue shows St. Alban protecting a missionary from persecution. Outside the entrance of the Chapel of St. Columba, a sculpture of St. Alban by Gutzon Borglum can be found along with those of other key figures in the history of Christianity in England. 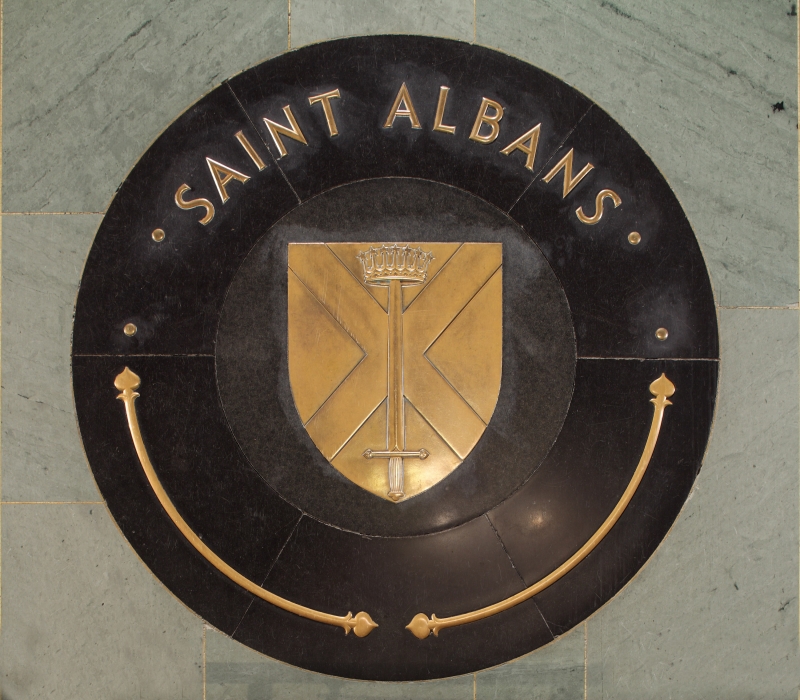 Along the nave floor are medallions which represent various pilgrimage sites. St. Alban’s Cathedral is the third medallion from the west doors on the south aisle. It is paved with green Vermont argillite, with borders of black argillite. A bronze sword and saltire decorate the medallion. St. Alban’s Cathedral is still an important pilgrimage site in the Church of England. His feast day is June 22nd.