As the Director of Public Education and Visitor Services, one of my favorite things to do at work is to walk through the Cathedral admiring the architecture, stained glass windows, and incredible art. One of the pieces in the Cathedral that I find extremely interesting is the Firefighter Memorial, a sculpture by Ralph Feldman located in the Labor Bay. I remember the first time I entered the Cathedral and saw this striking 35-foot high sculpture. It reminded me of all the brave men and women of the Fire Department of New York, or the FDNY as they are known.

It also took me back to my childhood in rural Wisconsin and the local rescue squad that my father, a former volunteer firefighter in the suburbs of Chicago, helped to start back in the 1970s. Most people are unaware that the majority of firefighters in the United States are volunteers, by some estimates up to 70%. This sculpture is a reminder of the dangers of the job firefighters do every day to help keep us all safe.

(As an aside, my father also owned a 1930s International Harvester fire truck – pictured below – that we used to take to parades and special events all over Wisconsin. My favorite part was the siren, of course.) 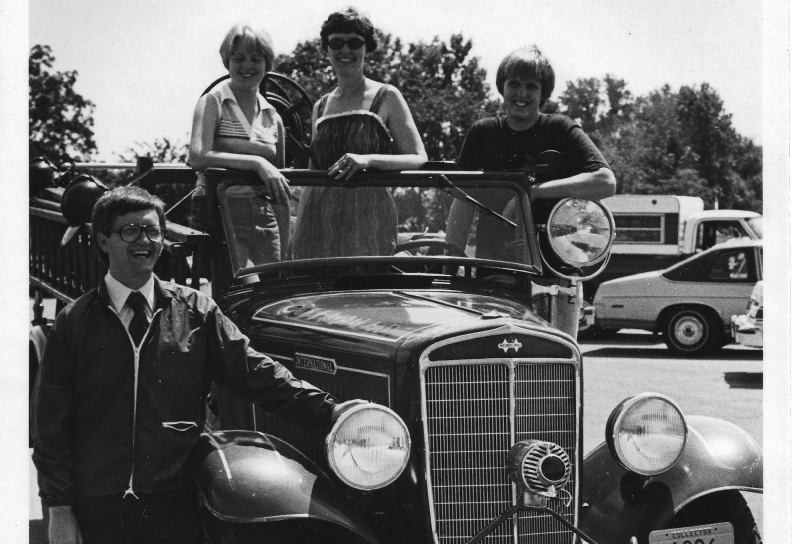 This sculpture was created by Ralph Feldman, himself a member of the FDNY, to honor the 12 firefighters who died in what is known as the 23rd Street Fire, which occurred on October 17, 1966. Until the tragedy of September 11th, the 23rd Street Fire represented the largest loss of life by the FDNY in a single event. Feldman created this sculpture to honor his 12 dead colleagues with a permanent memorial. 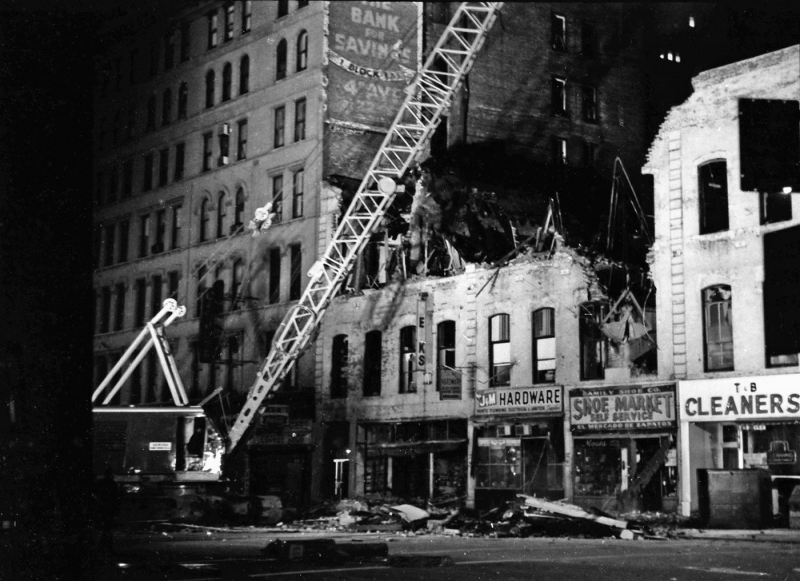 The sculpture is made up of:

The plaque on the sculpture reads in part:

“To the twelve heroic firefighters who perished in a fire in Manhattan at 23rd Street and Broadway on October 17, 1966 in the line of duty. We add their lives to the rolls of valiant firefighters who have made the supreme sacrifice.” 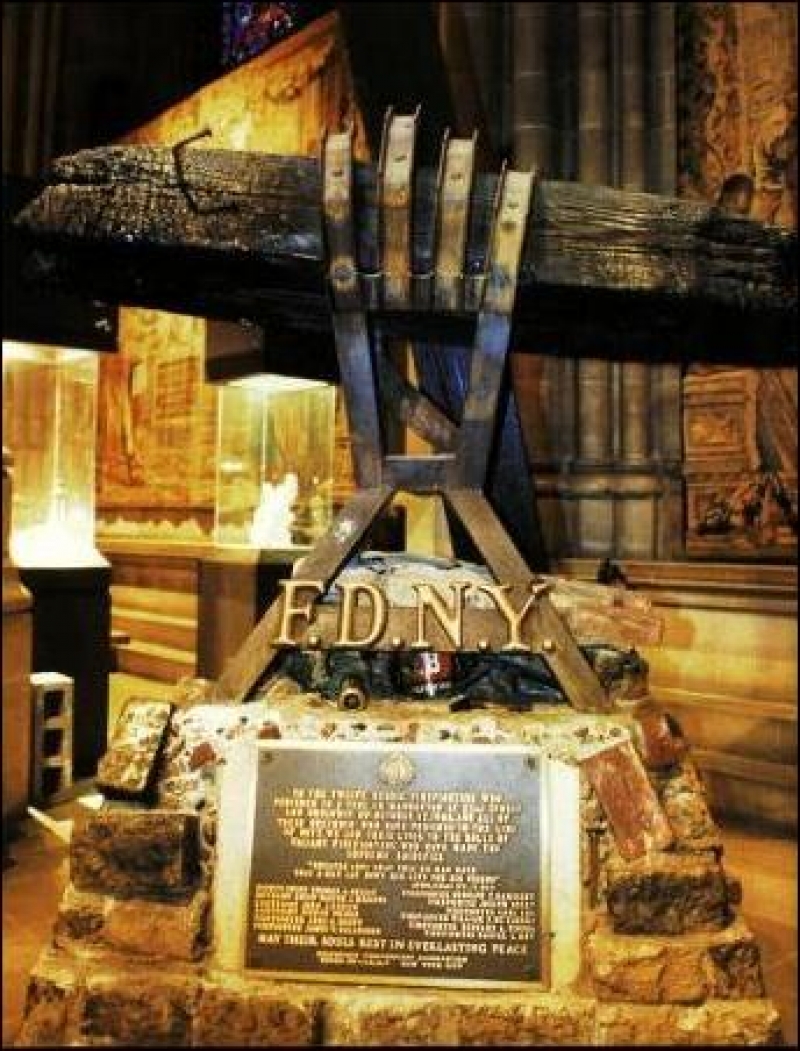 The piece was installed at the Cathedral in October 1976 on the 10th anniversary of the 23rd Street Fire. At that time, Feldman was quoted by the Daily News as saying, “It never occurred to me that I was building a sort of cross, but obviously that’s what we have here.”

Since its installation, the Memorial has drawn firefighters from around the world to pay honor to all of their fallen comrades. And this became even more true after the events of September 11th. The sculpture is a striking reminder of lives lost in both these tragic events. 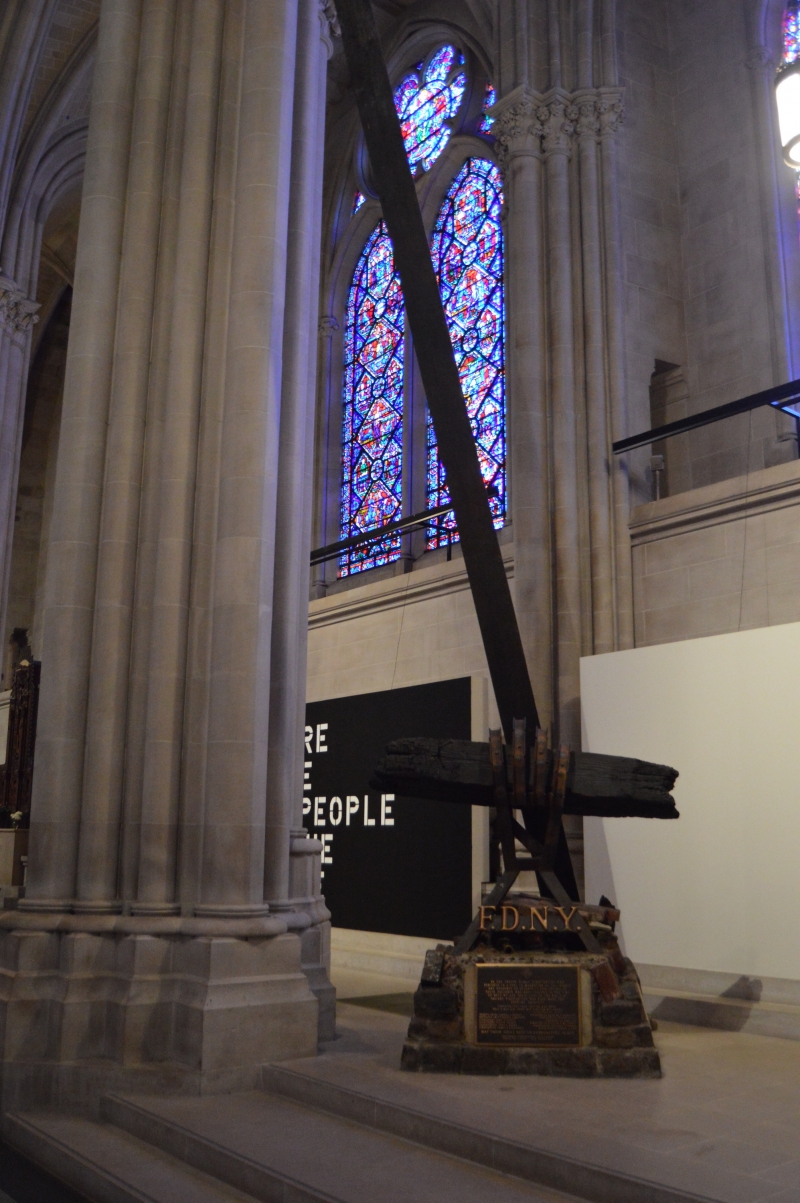 I would be remiss if I did not mention the Cathedral’s own close relationship with the FDNY. City firefighters have responded recently to two significant fires at the Cathedral. The first occurred in December 2001 – a six-alarm blaze that destroyed the north transept and severely damaged the Great Organ. The damage required extensive restoration work and the Cathedral was not fully reopened until November 2008.

And more recently, on April 14, 2019, Palm Sunday, a fire broke out in the Cathedral’s Crypt between the morning services, filling the Cathedral with smoke. In the summer and fall of 2019, an extensive project was undertaken to once again clean all of the stone in the Cathedral.

We at the Cathedral are indebted to the FDNY for their service to save the Cathedral. And we are proud to showcase their dedication and hard work with the Firefighter Memorial by Ralph Feldman. 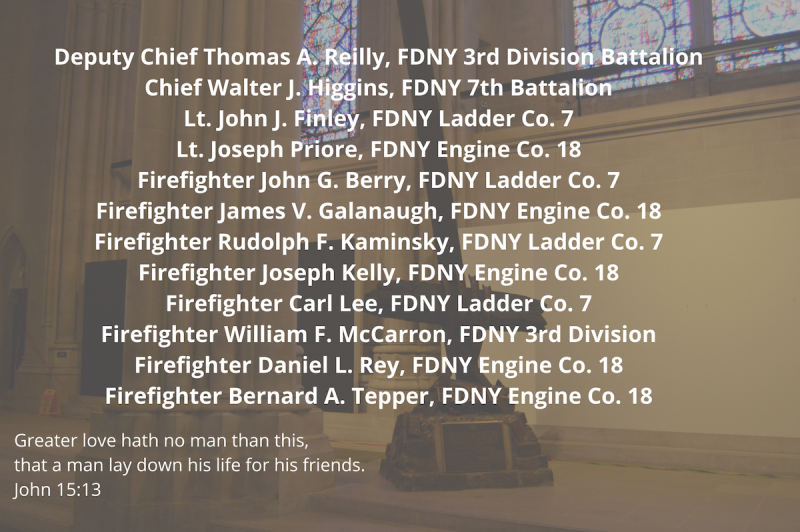