The Queen Mother and the Cathedral If you’ve been to the Cathedral during Advent, you’ve likely noticed the beautiful blue frontal that covers the High Altar and possibly wondered how the Cathedral came into the possession of fabric with the British crown and rose details.

On October 31, 1954, a year after her daughter's coronation, the Queen Mother attended a Sunday service at the Cathedral as a part of a visit to New York City. She was greeted by Bishop Hoarce W. B. Donegan and addressed visitors outside before entering and unveiling the Cathedral’s motherhood window.

Later that same day, she returned to the Cathedral to receive an honorary Doctor of Laws degree from Columbia University in front of 7,000 people. Grayson Kirk, then president of Columbia, described the Queen Mother as “a gifted musician, accomplished linguist… [and] student of the arts.”

This begun a long-lasting relationship with the Cathedral and particularly Bishop Donegan. Donegan, who was born in England, traveled to his country of origin almost every summer and often visited with the Queen Mother during his trips. Over the years, she gifted him many tokens of friendship, including the fabric used for the frontal. 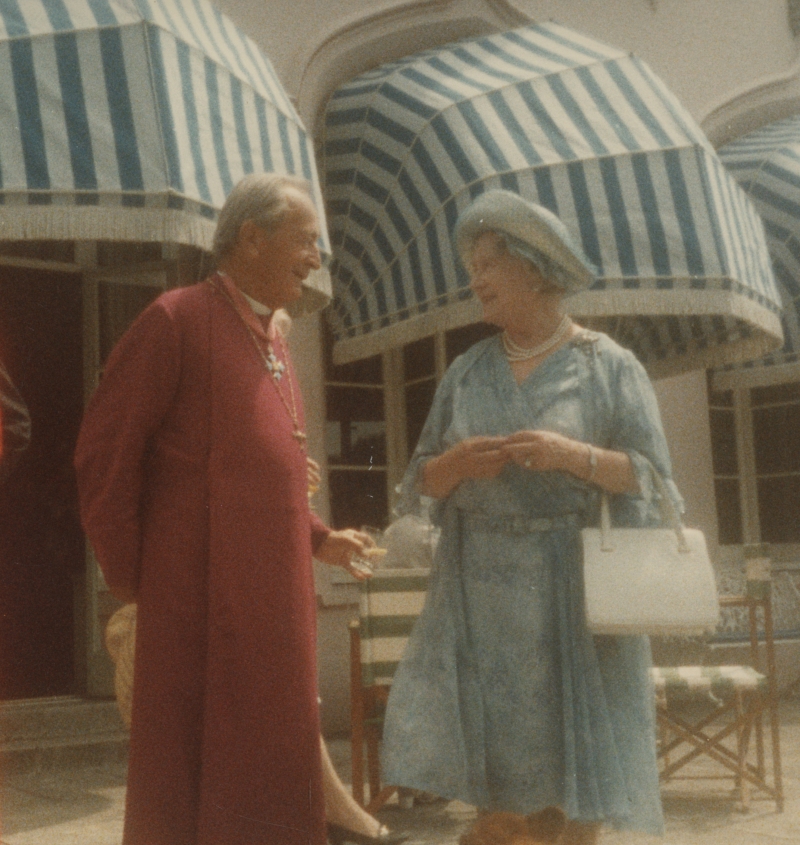 Bishop Donegan and the Queen Mother in England.

The fabric, which had been used to drape Westminster Abbey during Queen Elizabeth II's coronation, is made of blue silk satin. It’s adorned with a gold, tan and metallic brocade in the form of an oak wreath surrounding a crowned leek, thistle, and rose floret fabric. There are no written records of the gift, leading most to believe she hand delivered the fabric to Donegan at some point. 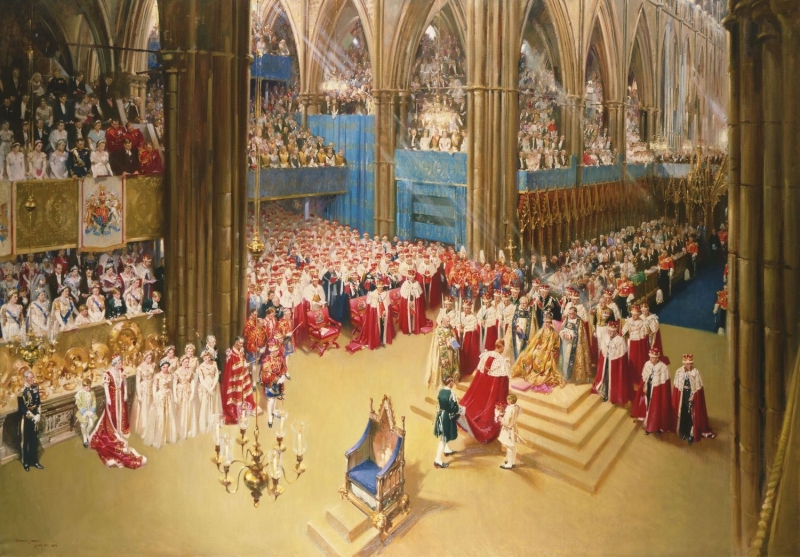 Queen Elizabeth II's coronation, with the fabric lining the halls.

In England, the fabric is still used to decorate the House of Lords, which the Queen visits once a year for the ceremonially opening of Parliament. (This year, the event took place on October 14.) The Church of England, of which Queen Elizabeth II is the head, is a part of the Anglican Communion along with The Episcopal Church

At the Cathedral, the fabric was sent to textile manufacturer J.M. Hall where four pieces of the silk were lined and then attached to a rectangular piece of linen to allow the work to sit atop the High Altar during Advent, the four Sundays before Christmas. 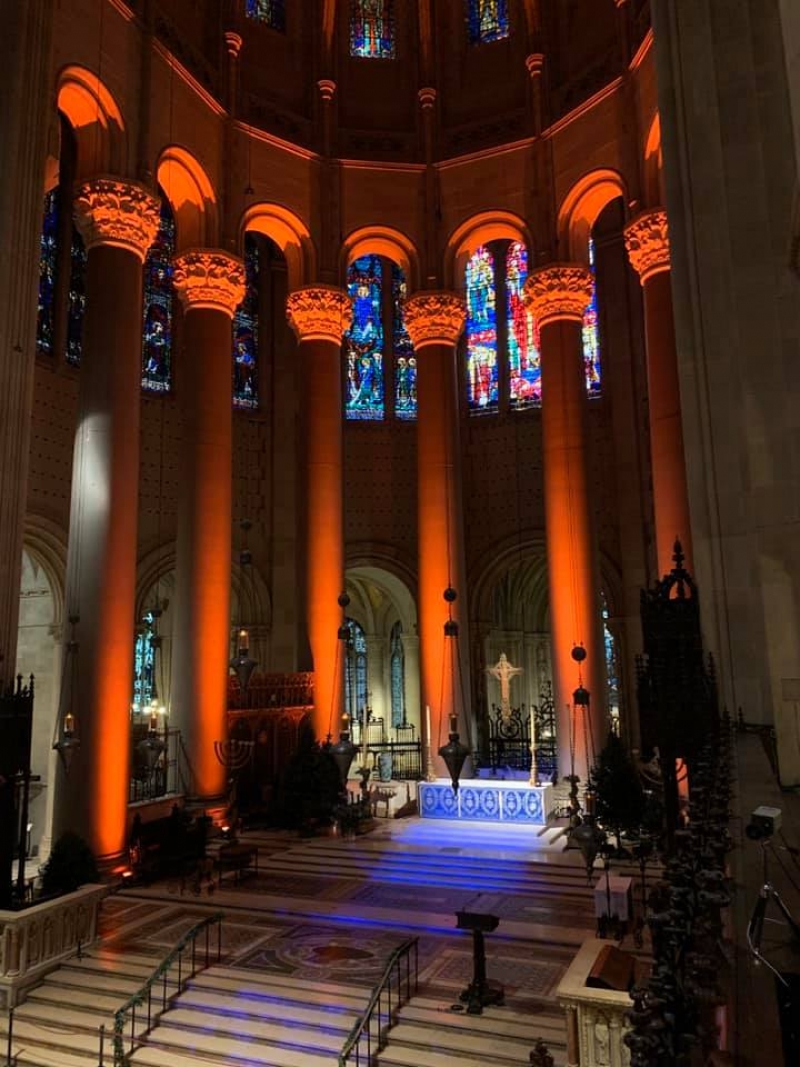 In 2018, after years of use, the frontal was sent to the Cathedral’s Textile Conservation Lab for review. Though the frontal was in relatively good shape, the Lab identified slight tearing between the linen top and silk pieces where the weight of the silk had taken a toll, weakening between the silk and its lining on the bottom where the piece had brushed the ground, and staining on the linen top and lining.

Because the piece is going to continue to be used, the Lab not only repaired the top seams but also added additional support to strengthen it during future use. While the weakened bottom areas would not be a problem for display, because the frontal is moved often the open seams create potential for it to catch on something and rip, so they were repaired as well. 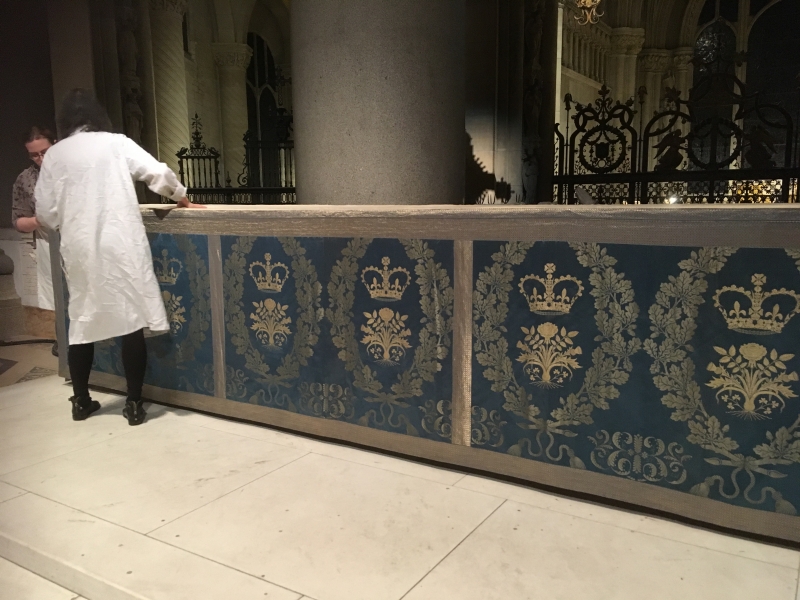 The frontal will return to the High Altar for the first Sunday in Advent, December 1, 2019.