Blessing of the Animals Tapestry Susan Martin Maffei is an internationally known tapestry artist who began coming to the Cathedral in the mid-1980s while working as a weaver at the Scheuer Tapestry Studio to work with Bruce Hutchison, then director of the Textile Conservation Lab. In this post, she recalls how she was inspired to weave the Blessing of the Animals tapestry.

I visited the Cathedral often to see the new carvings on one of the front entrances and to visit the tapestries. One morning I stumbled on crowds of people surrounding the church at what I would learn was the Feast of Saint Francis service with their pets being interviewed and filmed by television personalities. I was amazed at the variety of animals and the line to enter the Cathedral that went on as far as I could see. Soon the procession of exotics began: elephants, camels, bulls, snakes, birds. It was like Noah’s Ark filling up. And then the long line of people and pets filed together into the Cathedral.

I did not get in that day but subsequently watched the event on film. My inspiration was flowing and I began my weaving with the procession entering onto the steps and built what I could remember from there. I had made many drawings on visits to the Cathedral both exterior and interior. The crowd became a colorful pattern surrounding the stark black and white of the building. Bruce is in the crowd carrying his favorite peacock from the grounds.

The scene transitions inside to show the backs of all the heads both people and pets. As the procession moves along, the choir sings and the entire event hangs from part of an ancient musical notation that celebrates St. Martin (the patron saint of St. Francis) and St. Francis. The angels look down from above including the Guardian Angels, distinguished by their red berets. 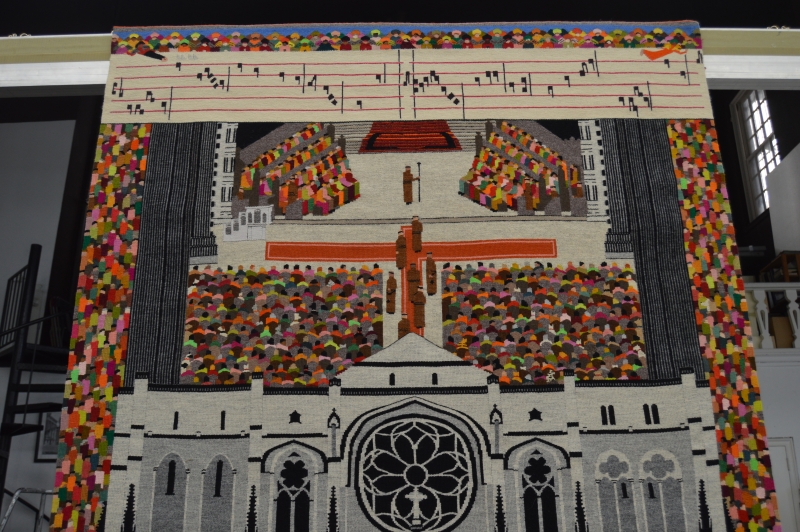 The tapestry was woven without a cartoon and completed in the mid-1990s. I used only the sketches of the church and the music score as reference to build the work as I remembered the celebration. Tapestry is such a slow process and one must begin at the bottom and build one section at a time and so lends itself so easily to the narrative. It becomes memory reliving the event slowly with much contemplation. This was a joy and one of my best works of that period.

Susan Martin Maffei has been weaving professionally since 1985. She has taught, lectured and exhibited in the U.S. and abroad and has work in both public and private collections. She lives and works with her partner Archie Brennan and together the two are known for their technical process, portable looms, and instructional materials.