Following is a recent sampling from the Cathedral's long history of presenting exhibitions, from meditative to challenging, historical to contemporary. 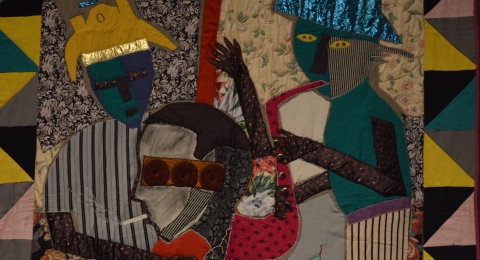 In celebration of the Harlem Renaissance 100 Community Celebration, we spotlight artifacts highlighting James Reese Europe's life as a composer and member of the Harlem-based 369th Infantry during WWI. Punctuating the display cases are two Jazz Quilts from Harlem-based artist Michael A. Cummings. 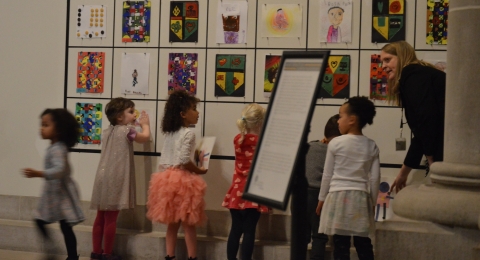 Children's Creations of Color: A Celebration of Black History Month 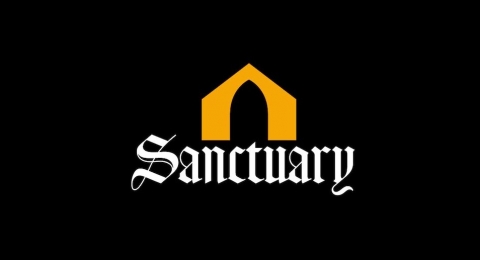 The Value of Sanctuary: Building a House Without Walls

Beginning with the historic framework of the Cathedral as a site of welcome and refuge, this multidisciplinary exhibition explores the question of sanctuary through the work of modern and contemporary artists. Using the Cathedral’s sacred space as a canvas, these works illuminate the intersections between spiritual and social identity, and the ways in which personhood and community cohesion speak to and are formed by notions of dignity, inclusion and exclusion.

Learn more about the art and artists in the exhibition. 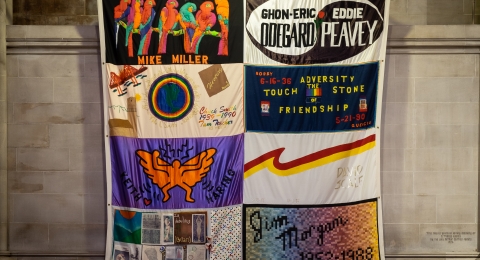 Coinciding with The Congregation of St. Saviour’s support of the 2018 New York City AIDS walk, we’re pleased to display three panels of the AIDS Memorial Quilt. Each panel includes the name of a person who had a connection to the Cathedral community’s historic and ongoing connection to the AIDS epidemic: Keith Haring, Robert Joffrey and Gerald Chapman.

Because of the Cathedral’s inclusivity as well as its proximity to St. Luke’s Hospital, we were at the forefront of response to the AIDS crisis in New York. The Cathedral now displays permanently a Book of Remembrance listing the names of people who have died of the disease as well as “The Life of Christ,” a triptych altarpiece that was Keith Haring’s last work before he died. 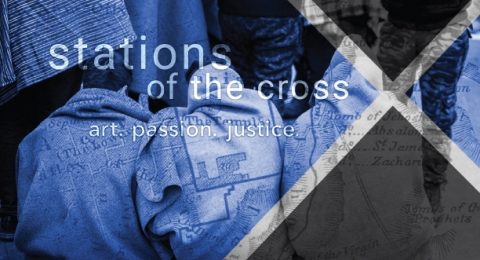 This exhibition, displayed at fourteen iconic spaces across Manhattan, examines the Stations of the Cross and the figure of Christ on the day of his crucifixion through the lens of contemporary art. In the work on view at the Cathedral, Station Four: Jesus Meets His Mother, artist Dua Abbas draws upon European devotional art, especially medieval paintings in The Cloisters collection in New York. Her cut-out animation combines this iconography with original photographs of her family members observing mourning rites during the Islamic month of Muharram, including decorative materials used in the construction of a commemorative model, or Tazia. During Muharram, Shiite Muslims commemorate the seventh-century martyrdom of the Imam Husayn ibn Ali (grandson of the Prophet) at Karbala in modern-day Iraq.

The artist comments: “I was interested in similarities between the figures of Mary (mother of Jesus) and Fatima (mother of Husayn) and the cultures of remembrance that have developed around the sufferings of their sons. I have tried to explore themes of maternal devotion, travel and transformation, and the fluidity of faith and its expression.” 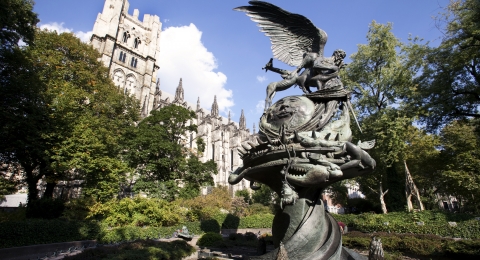 A Summer of Sculpture

We celebrated Greg Wyatt’s iconic Peace Fountain by immersing the Cathedral in sculpture including the National Sculpture Society's A Blessing of Animals, a juried exhibition of monumental animal sculpture featuring the works of 26 this country’s leading animal sculptors, and a celebration of the Art Students League of New York's Model to Monument program. 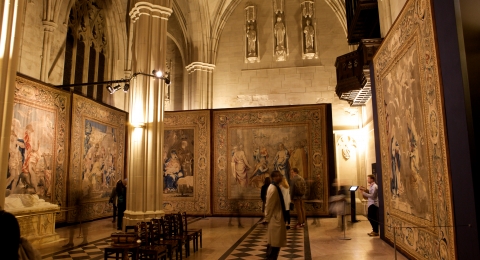 In its half-century of activity, the Barberini workshop custom-wove designs by some of the most eminent painters of the era, Peter Paul Rubens, Pietro da Cortona, and Giovanni Francesco Romanelli, and decorated the Vatican Palace, the Sistine Chapel, and the Palazzo Barberini. This magnificent exhibition shed light on these objects as both an aesthetic experience and as cultural artifacts.

You can learn more about the history of the Barberini Tapestries on our website and about the details of the tapestries themselves from the University of Oregon's website. 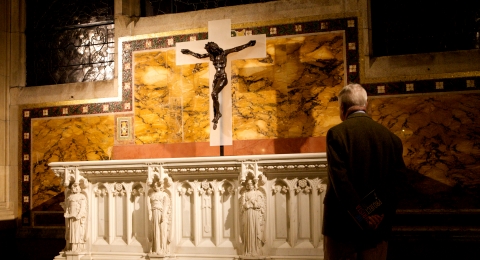 The exhibition explored the language, symbol, art and ritual associated with the historic concept of the Christ image, and the ways the divine is manifested in every person, across every gender, race, ethnicity and sexual orientation. More information is available here. 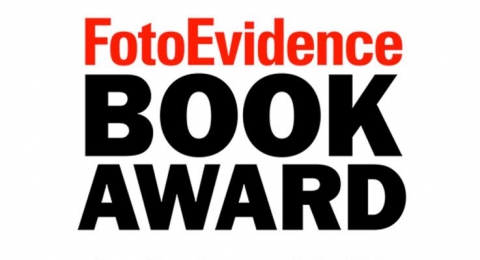 Each year, the FotoEvidence Book Awards recognize a photographer whose work demonstrates courage and commitment in the pursuit of social justice and human rights. 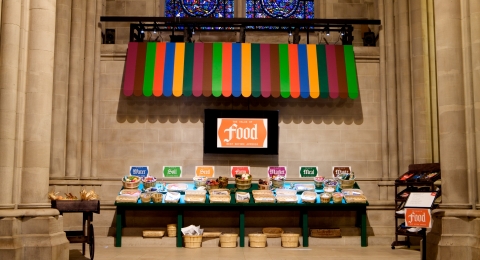 The Value of Food: Sustaining a Green Planet

The Value of Food was a large multimedia exhibition and series of public programming, in keeping with the Cathedral's long history of engagement with issues of social justice, the environment, support for the arts, and community involvement. The Value of Food has an expanded website, with information on related events, the artists, and curators, available here. 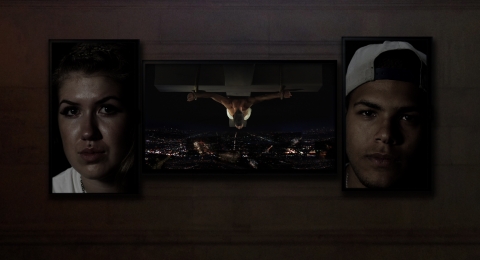 The Intersection of Dreams

Terry Flaxton's The Intersection of Dreams, is a moving-image triptych inspired by Salvador Dalí's Crucifixion (Corpus Hypercubus). This piece's center presents a changing image of Christ—a Christ of varying race and gender—while the side panels of the triptych also shift, illustrating the reactions of a diverse, contemporary, and young audience. 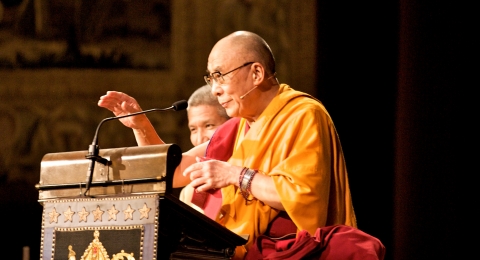 His Holiness the 14th Dalai Lama: Journey for Peace and Secular Ethics

This photography exhibition, presented in collaboration with The Tibet Fund, celebrated the life of His Holiness the Dalai Lama and featured the work of various internationally-acclaimed artists (Sonam Zoksang, Tenzin Choejor, Alison Wright, Mary Bloom, David Sanger, and Richard Shay) who have been touched by his words and actions. The collection of portraits illustrated His Holiness's love and respect for all people, as exemplied through his work in civil rights and interfaith understanding. 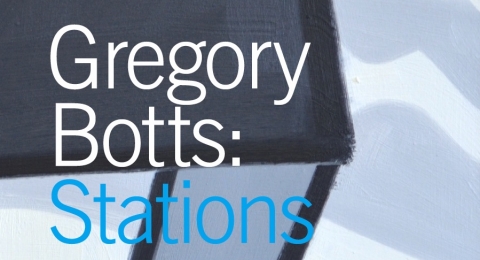 Gregory Botts' collection of fourteen paintings returned to the Cathedral, having been previously displayed and enthusiastically received here in early 2011. These works, rendered abstractly in tones of black, white, and gray, subtly parallel the traditional form of The Stations of the Cross. The blue squares on each canvas outline a cyclical progression, in reference to the "tragic idea of every moment's passing," but also embrace a theme of recurrence, following as Christ falls and is reborn. 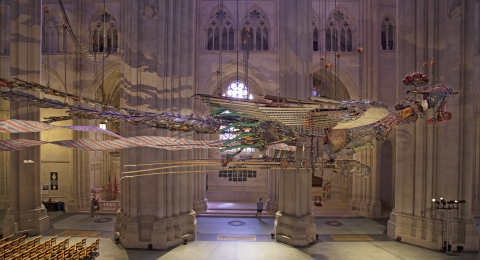 Phoenix: Xu Bing at the Cathedral

Over the course of two years, pioneering Chinese contemporary artist Xu Bing culled detritus from construction sites across the rapidly changing urban landscape of Beijing, and transformed it into his most monumental project to date: Phoenix (2008-10). A feat of engineering and ingenuity, Phoenix is composed of two birds, a male called Feng and a female called Huang, together weighing 12 tons and measuring 90 and 100 feet long, respectively. At once fierce and strangely beautiful, Xu Bing's mythic birds bear witness to the complex interconnection between labor, history, commercial development, and the rapid accumulation of wealth in today's China.

Phoenix: Xu Bing at the Cathedral was the second presentation of these works in the United States. They were previously on view at MassMoCA, North Adams, MA, and have been exhibited in China at the Today Art Museum, Beijing, and Expo10, Shanghai. 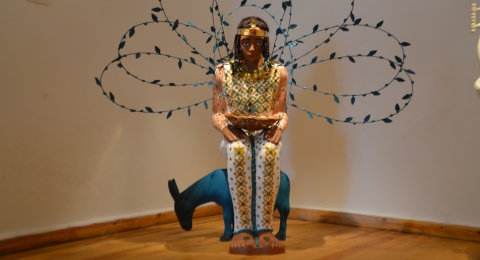 Amen: A Prayer for the World

This traveling interfaith arts exhibit, brought to the Cathedral by CARAVAN, is designed to build bridges of respect, understanding, and sharing between the creeds and cultures of the East and West. The exhibition featured 48 fiberglass sculptures in prayer painted by Muslim, Christian and Jewish artists from Egypt and the West, seeking to express the deep, fundamental acknowledgement of power and hope for all peoples. To evoke the commonality of prayer, the sculptures' four poses, painted or decorated in a variety of designs, symbolize human diversity, community, and the many forms prayer can take. The fiberglass forms were sculpted by the noted Egyptian artist Reda Abdel Rahman. 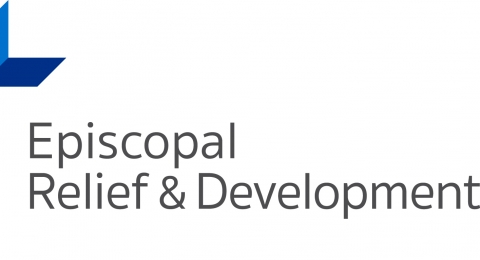 In celebration of Episcopal Relief & Development’s long-time devotion to humanitarian causes, this touring photo exhibition shows their mission of “healing a hurting world” in action around the globe, from China to Ghana to El Salvador to Louisiana to New Jersey, and points in between. The presentation featured a collection of iconic photographs, intended to give the viewer insight on the organization’s history and values. 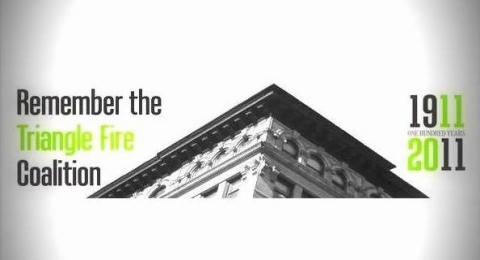 Across the Centuries, Across the Continents: Triangle Fire and Bangladesh Garmen

Created with the support of the Remember the Triangle Fire Coalition, a national alliance of organizations and individuals formed to commemorate the Triangle Shirtwaist Factory fire, writer-artist-activist Robin Berson’s two quilts, Triangle Fire Memorial Quilt and For the Lost Garment Workers of Bangladesh, paralleled the historic horrors that served as a catalyst for sweeping workplace reform in the United States and the modern-day tragedies that affirm the need for continued focus on creating safe and just spaces for laborers everywhere. In remembrance of the 146 victims of the Triangle Shirtwaist Factory fire of 1911 and 1,300 lives lost in the Tazreen and Rana Plaza disasters of 2012 and 2013, Across the Centuries, Across the Continents: Triangle Fire and Bangladesh Garment Workers Memorial Quilts honored the lives and struggles of garment workers and welcomed conversations on labor rights issues, both past and present. 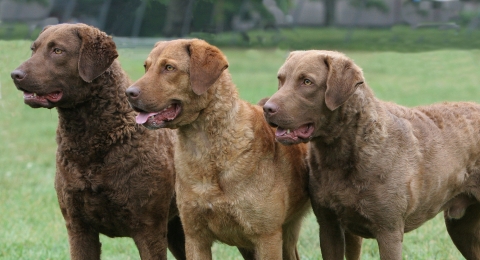 Dog Bless You: The Photography of Mary Bloom

Dog Bless You: The Photography of Mary Bloom focused on Mary Bloom’s sensitive and dignified portraits of dogs—of all manner and breeds. The Cathedral’s Photographer-in-Residence for two decades (from the early 1980s to 2002), Bloom is currently the official photographer of the Westminster Kennel Club. Her photographs have appeared in numerous publications, including Life, People, and Smithsonian Magazine. A slideshow accompanied the exhibition, cycling through decades of her loving photographs of this living Cathedral and the menagerie of animals that have passed before her lens 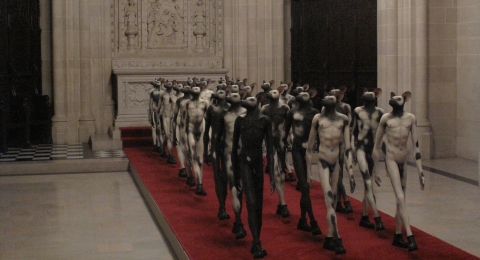 Jane Alexander: Surveys (from the Cape of Good Hope)

Organized by the Museum for African Art, New York, and presented in collaboration with the Cathedral, Jane Alexander: Surveys (from the Cape of Good Hope) was the first major North American survey of tableaux, sculptures, and photomontages by important South African artist Jane Alexander. Her artwork speaks of lasting disfigurations in her native South Africa, yet raises issues about human nature that resonate with viewers internationally. This site-specific exhibition at the Cathedral allowed audiences to experience the familiarity and mutability of Alexander's universe. 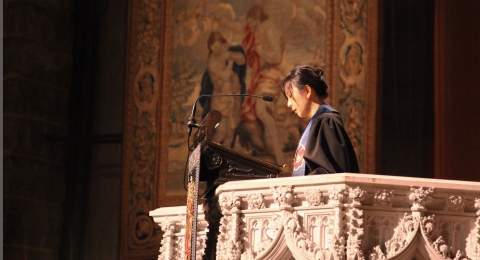 Voices from Japan: Despair and Hope from Disaster

In an effort to document the extraordinary experience of the Japanese people following the earthquake and tsunami of March 11, 2011, the Cathedral presented Voices from Japan: Despair and Hope from Disaster, a multi-faceted exhibition and cultural exchange program. The project was conceived as an exchange with the Japanese people and an exploration of the role of the arts in the process of recovery. The exhibition included: poetry by Japanese citizens; portraits of people affected by the tsunami by Naoto Nakagawa; photographs by Magdalena Sole, documenting the Tohoku region in the aftermath of the disaster; collages of family photographs, salvaged from the wreckage of homes, by Yoshihito and Saori Sasaguchi; “Narrow Path to The Deep North,” a film by Joseph Krakora; and calligraphy by Kanji Chiba.

Voices from Japan: Despair and Hope from Disaster was organized in collaboration with Isao Tsujimoto, of the Studio for Cultural Exchange, Tokyo, the Asian Cultural Council, New York, and the New Heritage Theatre Group, New York. 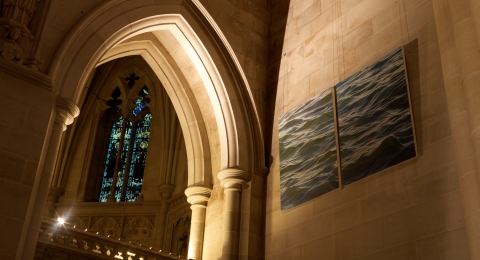 The Value of Water: Sustaining a Green Planet

Among the Cathedral’s most ambitious contemporary art presentations, The Value of Water: Sustaining a Green Planet was a multifaceted project, centered upon a major exhibition that filled the entire Cathedral with more than 100 works of art in all media, by more than 40 artists. Through this exhibition and its related programming—which included rallies, storytelling, poetry, performances, conversations, and film screenings—the Cathedral sought to convene and sustain a wide-ranging conversation about the use and misuse of water, one of the most fundamental, and threatened, elements of life. Its goal was to educate, raise awareness, and empower individuals to take responsibility for the fair and sustainable use of this precious life commodity. 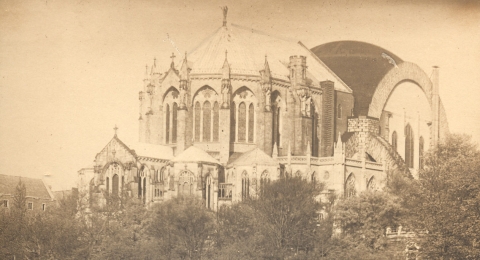 From the Archives: The Cathedral in Photographs

Organized in celebration of the completion of the post-fire restoration and the Cathedral’s grand re-opening in November 2008, From the Archives: The Cathedral in Photographs brought together a selection of photographs from the Cathedral’s archives, focused on the Cathedral itself and its many exquisite details that lay far out of sight. With the aid of their cameras, the artists who have photographed the Cathedral made these hidden details visible. The exhibition encompassed a range of works, spanning the 20th century and including the soft-focus, Pictorialist works of early 20th-century photographer Antoinette B. Hervey and a moody, contemplative image by contemporary photographer William Rivelli. 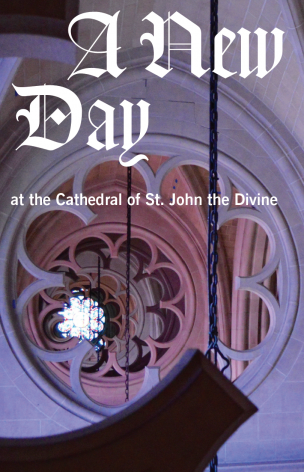